From Marspedia
(Redirected from Business)
Jump to: navigation, search 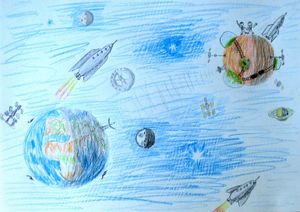 As discussed in [1], the UN recognition of a Mars base and the inclusion of that Mars base into the Universal Postal Union will allow for multimodal transport between any place between Earth and Mars utilizing existing agreements. That is to say, a person on Mars could order a product online from Earth and have it delivered without the retailer needing to do anything new or unique. They simply buy shipping, place the stamp on the box and hand the box to the post office. That box then runs through the postal system as normal, until it reaches a multimodal distribution center at a spaceport, where the box would then be loaded on a cargo rocket and sent to Mars. This greatly simplifies the mechanics of consumer interplanetary commerce, as it builds on top of existing infrastructure.

On Earth, a growing part of international commerce is the commerce of services. This will also be true for Mars, although the time delay in communications may reduce some of the services possible.

A challenge with the development of a large scale industrial base is long term price stability for bulk commodities - fuel, food, etc. A possible solution to this is discussed in [2], through the use of a futures system. Through this system, standardized contracts for fuel or food, delivered at some standardized depot, are traded between consumers, producers, and financial intermediaries. These intermediaries then act as market makers utilizing their models of the market to providing the ability for consumers and producers to lock in prices at any time. Another key component of price stability is insurance. Being able to cheaply and consistently price risk is required for commerce at scale, as an example: insurance for cargo damaged in interplanetary shipping. Large stocks of goods may increase the stability of prices in general, by providing some inertia to the system.

The cost to transport an item will be many times the cost on earth of most items, often orders of magnitude greater. At least initially, only the smaller and more vital goods will be shipped: those that have the highest value per the lowest mass. Non-physical things, such as information, incur only the cost of a radio link. As discussed in [3], the use of reusable rockets in a leased rocket model in a competitive marketplace will reduce the cost per launch significantly. The leased model for rockets is similar to the leased model for cargo ships - the ship is constructed under a loan from a bank, which is backed by the ship itself. The owner then pays off interest and depreciation payments until the ship has completed its useful life and is sold for scrap. A key component of this marketplace is that rocket producers and launch providers are not vertically integrated, ie. as a plane analogy, Boeing cannot own their own airline and operate it as a monopoly. Through the use of a futures market in rocket fuel, fuel mined from various sources can compete on price. As an example, fuel mined from the Near Earth Asteroids (NEA)'s through Honeybee style automated asteroid mining [4] would be able to compete against fuel mined from the south pole of Luna, reducing the cost and improving the stability of supply of fuel to consumers.

Distances between the planets and Luna are always changing, requiring precise calculations for accurate transport.

The distance between earth and Mars may also be seen as an opportunity, in particular for safe data storage. Although competition from the Moon in this case may be overwhelming.

Due to orbital mechanics cheap orbits occur reasonably infrequently, leading to long lead times for goods. This can be a problem for Martian retailers, as they would have purchased the goods on Earth, and they then have to maintain a line of credit until the goods are eventually delivered to Mars and sold to customers.

Communication delays between Earth and Mars are significant, form 15 to 30 minutes for bidirectional communications. This will makes the commence of services more difficult., and reduce some work opportunities for Martian businesses.

Mercury has similar gravity to Mars, so engineering solutions developed on Mars may be applicable to Mercurial outposts. Similar to the moon, it has a metal rich regolith along with what appears to be permanently shaded regions at the poles that may harbor water or possibly other volatiles[5]. Unlike the moon, however, it receives 5-10x the amount of energy from the sun per square meter[6] which makes it an interesting candidate for the production of refined metals and other energy intensive products. BepiColombo, due to reach Mercury in 2025 will provide more detailed observations of the planet.

Trade with Earth's moon could involve selling resources such as carbon, nitrogen, and other volatiles which are in short supply on Luna and buying fuel as a refueling station between Earth and Mars[7] The cost of transport from Mars is potentially less than from Earth, but potentially more than from Ceres and other asteroids, because of the relative sizes of the gravity fields. However, the cost of setting up a colony on Ceres may be more than the cost of setting up one on Mars. So the cost of obtaining exports from the raw materials and shipping them out may be less on Mars than on Ceres because of the human labor on hand to smooth out the operations.

Optical near Earth or near Mars asteroid mining[8] has been proposed as a mechanism to produce fuel for LEO/LMO fuel depos, reducing the cost of interplanetary transportation.

Ceres is a dwarf planet and the largest object in the asteroid belt. It is a possible location for a human outpost. It is a possible hub for asteroid mining efforts. Ceres is thought to have significant amounts of volatiles, including water[9], and so could be a hub for the production of rocket fuel for Mars and the outer solar system. The escape velocity of both Mars and Ceres are favorable. Commerce between Ceres and Mars may involve information, resources, and martian manufactured goods.