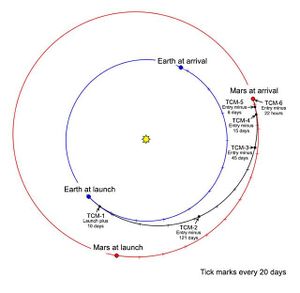 An Earth-Mars transfer trajectory is an orbital path which a spacecraft follows to travel between Earth and Mars. Several types of trajectories have been studied, but all will satisfy the following conditions:

Not all Mars transfer orbits are Hohmann transfers. This is due to the difference in the plane of Earth and Mars's orbit, and can also be due to constraints on launch windows. There are many variations on this theme, such as whether the spacecraft ends in a Mars-centered orbit or if the spacecraft directly enters the atmosphere from the heliocentric transfer orbit. Other less common variations include the starting orbit at Earth, which could be a low Earth orbit or could instead the mission could begin from geostationary transfer orbit (GTO) as in the MEGA proposals of the late 90's, or one could vary the heliocentric portion of the flight to include a low-thrust trajectory. 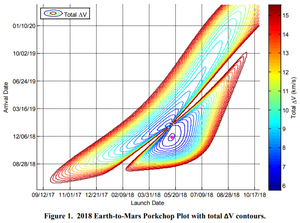 One drawback of porkchop plots is that they are only for single-arc transfers, which is why they have such large gaps as a result of launch and arrival plane changes. A different transfer trajectory could be constructed which uses a mid-course plane change maneuver at the intersection of the Earth and Mars orbital planes. However, most launch vehicles would not offer this capability.

There are other real-world considerations which affect the launch period; the ability of MRO to be at the right place at the right time to serve as a relay satellite during entry, descent, and landing constrained the end of Insight's launch period.

Typically a mission will first launch into a relatively low Earth-centered parking orbit, then it will coast in that orbit for a variable amount of time, and finally the second or third stage of the launch vehicle will inject the spacecraft into a Mars transfer orbit. This injection can either take place all at once, as with the 8 minute burn for Curiosity's launch, or it can take place over several orbits with gradual apogee-raising maneuvers as in the case of Mars Orbiter Mission.

The parking orbit can be of any inclination. A heavy spacecraft like Curiosity may need to launch into a lower inclination parking orbit so it can take more advantage of the Earth's rotation at launch, however a small spacecraft like Insight might not. Insight launched south from Vandenberg into a polar orbit, coasted for 3/4 of a parking orbit, and the second stage reignited its engines approximately over Alaska to place Insight on the Mars transfer orbit. 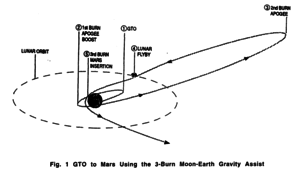 MEGA scheme for ride-sharing on a GTO launch and then achieving escape to Mars transfer orbit.

There are other ways of leaving Earth. One such way is the Moon and Earth Gravity Assist (MEGA) scheme, which has never been performed. In this scheme, a small (~200 kg) spacecraft hitches a ride as a secondary payload on a launch to geostationary transfer orbit (GTO). Once in GTO, the spacecraft will perform a burn at perigee which will raise its apogee enough to take it out beyond the Moon, but not quite escape Earth's gravitational pull. At this far apogee the spacecraft might perform a small burn to target a lunar gravity assist as it comes back towards the Earth. Finally, at the next perigee, the spacecraft will perform its Mars transfer orbit insertion burn.[2]

Another way to escape Earth would be a low-thrust trajectory, where the spacecraft slowly spirals out away from Earth until its eventual escape into heliocentric orbit.

Regardless of the escape scheme, practical considerations impose constraints on the trajectory and timing of maneuvers. For instance, a mission might need to time things so that spacecraft separation occurs in view of a deep space tracking station such as Goldstone. 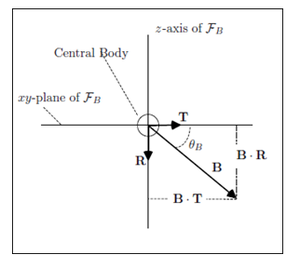 I'm not sure what is used for targeting the initial transfer orbit insertion burn, but the trajectory correction maneuver burns target a point on the "B-plane" of Mars. The B-plane is defined in a JPL glossary as the "plane perpendicular to the asymptote of the incoming hyperbolic trajectory of the object relative to the Earth."[3] I think of it as the "bullseye" plane, which is the plane of the dartboard from the perspective of the person throwing darts. B-plane targeting was originally developed for gravity-assist maneuvers, but it has come to be used for missions where the destination is the planet itself as well.

Using the concepts of Aerocapture and hypersonic entry a vehicle can arrive at Mars with a high residual velocity, and use friction with the planetary atmosphere to slow down and eventually land. This allows for much shorter travel times with about the same fuel use as more conventional transfer orbits. An average Hohmann transfer orbit to Mars requires 259 days and a delta-v of 3,9 km/s. An hyperbolic orbit depending on aerocapture for braking can reduce this to 90-150 days depending on the year of travel. For example in aug. 2020 for a delta-V of 4,8 km/s Mars could be reached in 96 days according to the Trajectory Browser .

topics to elaborate on