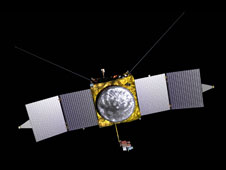 MAVEN stands for NASA’s Mars Atmosphere and Volatile EvolutioN mission. It was launched in November 18, 2013 to examine Mars’s upper atmosphere, ionosphere and interactions with the sun and solar wind. [1] [2] MAVEN was placed into orbit on September 21, 2014; in its highly elliptical orbit it travels out to 3,900 miles (6,200 km) then comes in as close as 93 miles (150 km). Each orbit of the planet takes 4.5 hours. With such a large elliptical orbit it can study different parts of the Martian atmosphere.[3] 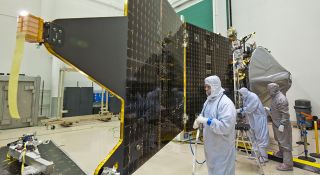 Of major significance was that MAVEN discovered how Mars lost most of its atmosphere into space. "We've determined that most of the gas ever present in the Mars atmosphere has been lost to space," said Bruce Jakosky, lead author of a paper published in Science. [6] His team’s study was based upon two different isotopes of argon gas.[7] [8] Argon gas is inert, it does not react with anything; hence, it is a good marker of how the atmosphere changed. The heavy form of argon is not lost to space as easily as the lighter variety. A larger proportion of heavy isotope on the planet means that more of the gas has disappeared. The ratio of the heavier Ar38 to the lighter Ar36, means that 65% of argon has left the planet. The main way that argon left the atmosphere was through a process called “sputtering.” Sputtering is a complex method in which the sun strips atmosphere from a planet. The sun is constantly shooting out particles at high speed. If one hits a gas particle in the atmosphere, it may directly knock it into space. Alternatively, it would cause an atom of atmosphere to lose an electron and thereby become an ion. Ions can interact with the sun’s magnetic field as it moves through space. The sun’s magnetic field can then sweep them away. In addition ions may hit other atoms in the atmosphere, knocking them into space, as well.[9] This finding that Mars has lost a great deal of its atmosphere, especially water is consistent with several other studies .[10] [11] [12] [13] [14] [15] [16] Although Mars is cold and dry today, it may have been warmer with a thicker atmosphere and liquid water in the distant past. Observations over many years from orbiting satellites have seen what looks like streams, rivers, and lakes on the surface. [17] [18] [19] [20] [21] [22] [23] [24] [25] There is even evidence for an ocean in the past. [26] [27] [28] [29] MAVEN and other missions are showing how Mars could have lost most of its atmosphere.

In September 2017, MAVEN observed an aurora 25 times brighter than any observed earlier, due to a massive, and unexpected, Coronal mass ejection (solar storm).[30] 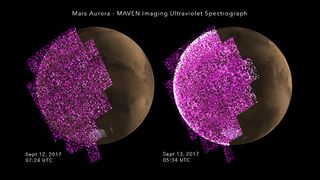 Aurora before and during a solar event

Besides studying the atmosphere with a variety of instruments from close and far distances, MAVEN greatly helps with the study of Mars by serving as a relay station between spacecraft on the Martian surface and NASA scientists on the Earth. A probe on the surface would need to wait many hours to send back information when the planet is turned away from the Earth. Much time is saved by using orbiting satellites to pick up and send data from the surface to Earth. 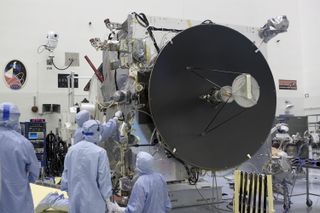 MAVEN with its high-gain antenna in clean room

Just by chance immediately after MAVEN went into orbit, comet C/2013 A1 Siding Spring on October 19, 2014 went by Mars.[31] It took an ultraviolet image of the hydrogen around the comet. The cloud of hydrogen gas was about the same size as our moon as viewed from the Earth.[32] As the comet came close, it was studied with MAVEN’s magnetometer (MAG), the Langmuir Probe and Waves (LPW) instrument, and the Solar Energetic Particles (SEP).[33]