Mariner 9, an unmanned NASA spacecraft made many important discoveries about Mars. It was launched on May 30, 1971. Mariner 9 went into orbit about nine months later on November 14. [1] [2] It was the first spacecraft to orbit another planet.[3] During its mission, it returned about 100 times more information than all previous missions to Mars.[4] 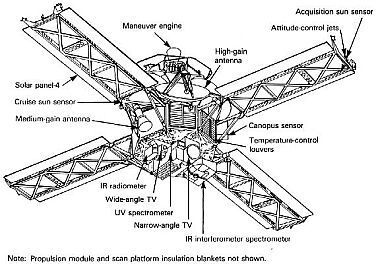 Mariner 9 completely changed our conceptions about Mars. Mariner 4, the first spacecraft to send back close-up pictures of the planet, made us think that Mars was just like the Moon with a surface covered with nothing but craters. After a major dust storm cleared, Mariner 9 took pictures of 100 percent of the surface and revealed huge volcanoes and a giant canyon (3,000 miles long). In addition it discovered curved and branched river valleys. The spacecraft also provided the first close-up pictures of gigantic volcanoes and a grand canyon stretching 4,800 kilometers (3,000 miles) across its surface. Phobos and Deimos, the two small, irregular-shaped moons of Mars were seen up close.[6] When the mission was over in October 1972, Mariner 9 had taken 7329 images.[7] 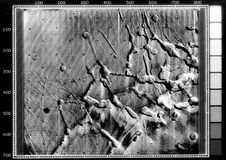