NASA's Phoenix mission was a robotic mission, the first lander in NASA's "Scout class". The lander landed in Mars' north polar region on May 25th 2008, and the scientific package aimed to answer the questions:

The mission is of considerable interest to planners of human missions to Mars, as many practical mission designs assume the availability of easily-extractable water for fuel production and industrial processes. The polar regions were expected to be the most likely places to find water ice. 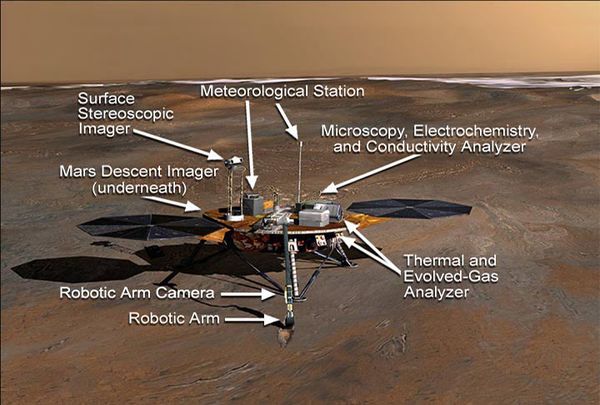 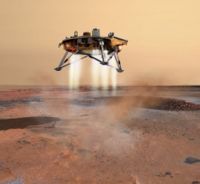 Phoenix lander descending to surface, as imaged by HiRISE

Phoenix was launched on 4th August 2007 on a Delta II 7925 rocket, and the scheduled landing on Mars on 25th May 2008 was successful. The landing site was the ice-capped northern polar region in the Green Valley of Vastitas Borealis.[1]

Although the primary mission was expected to last around 90 sols, the lander lasted over 5 months.[2] The last transmission was received on November 2nd, 2008 by the project team.

Phoenix's Thermal and Evolved Gas Analyzer (TEGA) is a combination of a furnace and a mass spectrometer. Samples of dirt are heated and the gases given off are analyzed with the mass spectrometer. TEGA measured how much water vapor and carbon dioxide gas were given off. Volatile organic compounds were also able to be detected.[3]

The Wet Chemistry Laboratory added water to samples that were delivered by the robotic arm. The samples were then stirred. Using a number of electrochemical sensors, the instrument measured ions that were dissolved from the sample.[4] 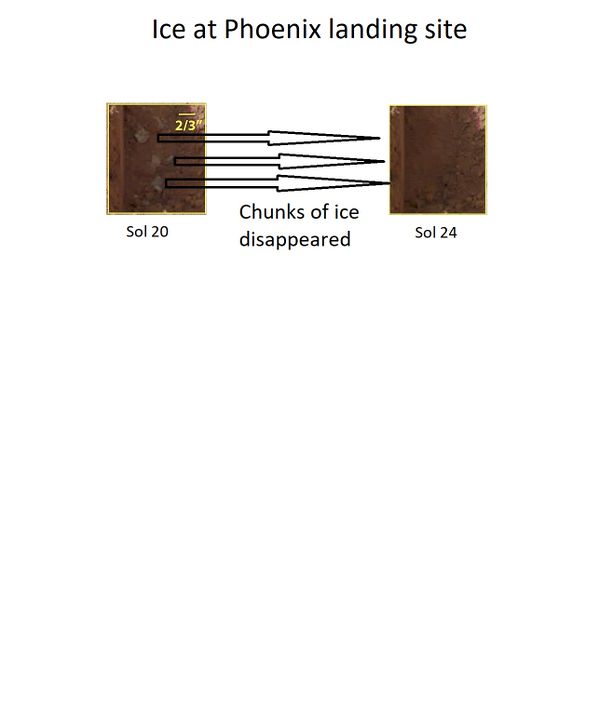 Analysis of the first soil sample discovered bound water and CO2. These were released during the highest-temperature, 1,000 °C) heating cycle.[14]

Chemicals measured in the samples were chloride, bicarbonate, magnesium, sodium, potassium, calcium, and sulfate. Further data analysis indicated that the soil contains soluble sulfate (SO3) at a minimum of 1.1% and provided a refined formulation of the soil.[15]

Phoenix studied the atmosphere and found snowfall. The laser instrument found snow falling from clouds at about 2.5 miles (4 km). Snow turned to vapor before landing on the ground.[16] Usually, Phoenix measured wind speeds between 5-10 m/s. It was concluded that heat from the sun sublimates ice and adsorbed water from soil, and when temperatures cool, water is returned as snow and frost to the soil. Temperatures went from -30 C to -90 C,[17] [18]

View under Phoenix spacecraft Bright regions are probably top of an ice sheet.