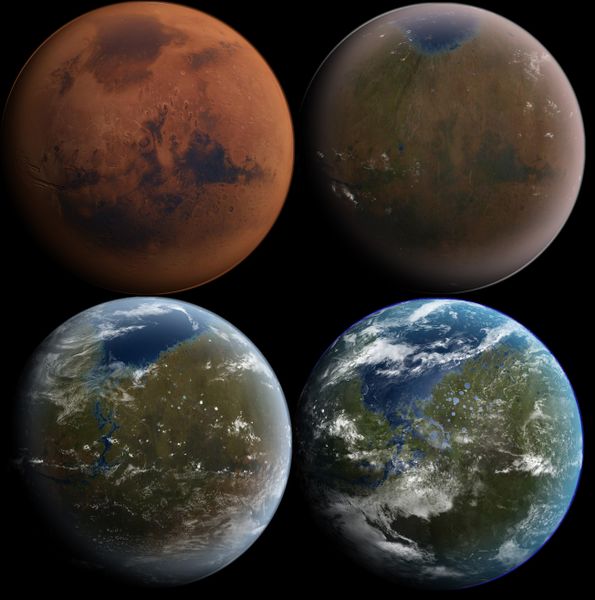 Terraforming Mars is a process by which scientists hope to convert Mars into an Earth-like planet, providing an atmosphere within tolerable limits for human survival.

Here is a link to another page on Terraforming.

The Sun has an approximate lifespan of ten billion years. Most scientists believe we are about halfway through that life span. Recently scientists have stated that the Sun will begin its death throes in about 2.8 billion years. (Astrobio.net) If humans behave in a way conducive to the health of the planet and themselves, we may still be in existence by then. If that is the case we must be able to take humanity to a new home. The Red Planet is a perfect first stop in this process. Mars will survive longer than Earth. But Mars will eventually perish as well. In that case we must use Mars as a “practice” ground for learning how to take humanity to extrasolar planets in order to spread humanity around the galaxy.

NASA and other science organizations have been discussing a process called terraforming for a very long time. Terraform means to make like Earth. Many proposals have been submitted on the best way to make Mars like Earth. The timelines proposed have varied from 100 years to 100,000 years. Logic dictates finding a balance between moving too fast and too slow. If we terrraform too fast, we may end up with a runaway greenhouse effect similar to what we see on Venus. If we move too slowly, we run the risk of other complications, such as the natural rhythms of the Red Planet changing during the process which could interfere and complicate any progress we may be making. Terraforming Mars is of utmost importance in order to learn to live on other worlds. Humanity must have the ability to be a multi-planet species in order to preserve Homo sapiens for millions or billions of years.

How could we go about terraforming Mars? The 1,000 year plan seems to be a reasonable timeline. If you utilize a version of Dr. Robert Zubrin’s, President and Founder of The Mars Society, Mars Direct plan, we would send up a series of habitats ahead of humans. An automated system to manufacture fuel on the surface of Mars would be included in the initial payload. This would allow the visitors to Mars to have a fuel supply ready for the return to Earth at a later date. Humans would then take the six month trip and each crew would stay for 18 months, some may eventually choose to stay on the Red Planet. Crews of Marsonauts would have an enormous responsibility to lay the groundwork for future Martians.

The first visitors would set up the habitat modules and start the greenhouse work. When each successive group arrives at the initial home base, all necessary groundwork will have been laid for them to immediately begin working on the next set of tasks. This may include creature comforts. In order for the settlers to feel at home on Mars, the habitats would need to be comfortable and roomy. We would like the crew to feel at home, which will help curb psychological concerns. The greenhouses must also be a top priority. CO2 is already present in the atmosphere of Mars for plants to utilize for respiration, and they will return the favor by “exhaling” breathable O2 for the settlers. (Zubrin) Humans may feel depressed and isolated, but the aesthetic value of plants could make them feel more at home. Plants will also serve as a major source of food which is essential to our survival. They will also provide oxygen for breathing. The Curiosity Rover has confirmed that the Martian soil is at least 2% water, so we will be able to heat up buckets of soil and extract water for plants and it must also be used for human consumption. (Grotzinger) The H2O can also be divided into hydrogen for fuel and oxygen for breathing when necessary. After we have perfected plants in greenhouses on the Red Planet, we may be able to allow bacteria and lichens, which are able to survive in arctic environments, to grow on the outside of the habitats and greenhouses. (NatGeo) The rovers on Mars have confirmed that the soil is already conducive to certain types of plants. (NASA)

Now we are ready for the next set of terraforming duties. What is needed next is a nice thick and warm atmosphere. Several suggestions have been proposed as to which approach for this is best. Ideas have been as varied as giant orbiting mirrors to nuclear explosions and everything in between. A common suggestion has been to release the CO2 frozen in the soil and in the polar ice caps into the atmosphere using factories spewing out what we consider greenhouse gases on Earth. Whichever tactic is utilized to thicken the atmosphere, once it is warm enough for the polar ice and ground ice to melt and turn some H2O to liquid and some to gas then we are well on our way to add more complex plant life. The water cycle should begin to look more Earthlike. Rivers should start to flow, seas will develop, and rain will fall. Regular weather patterns will develop and Martian meteorologists will surely scramble to predict weather as they do now on Earth. Next we will add insects and flowering plants. The soil will become more enriched with the addition of each more complex organism. This will allow for the addition of even more complex plants and animals in succession periodically, for instance large trees will allow forests to take hold. (NatGeo)

Energy is a must for the spread of civilization. It is hoped that we have learned from our mistakes on Earth, and we will use all clean energy with little waste on Mars. Transportation and city planning systems will be developed. (Zubrin) An entire new branch of humanity will start to evolve on the new Mars. Plants and animals will grow and change over time being separated from their parent species on Earth. Entire ecosystems will develop on their own trajectory, apart from all life on Earth. Over the 1,000 year period Mars will be turned from a vast desert with a coral sky into a bountiful planet full of life with a beautiful blue sky. It may look similar to Earth, but the inhabitants will become truly Martian.