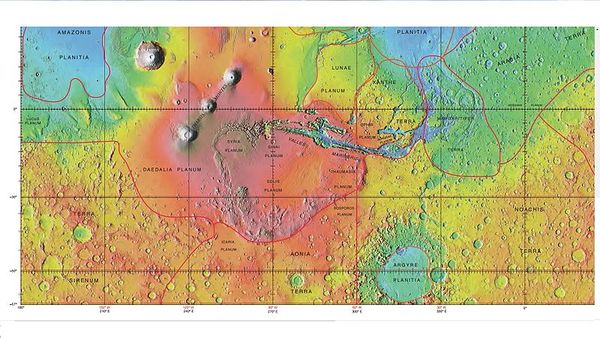 Margaritifer Terra is a heavily cratered region of Mars. It is centered just south of the Martian equator at 4.9 S and 25 W (335 E) and covers 2600 km at its widest extent.[1] The area displays chaos terrain, outflow channels, and alluvial plains that are evidence of massive flooding. A region within the terra shows some of the highest valley network densities on the planet. Ares Vallis is one place where the flood and flow patterns are in evidence; it was the landing site of NASA's Mars Pathfinder." It is also one of several proposed landing sites for the Mars 2020 Rover.[2]

Margaritifer Terra was named in 1979, after the Pearl Fishery Coast, south India. Part of it is found in the Margaritifer Sinus quadrangle and part in the Oxia Palus quadrangle.

One of the first images released under NASA's HiWish program was of layered mesas in Aureum Chaos.[3]

Some of the images from this region display layers. Many places on Mars show rocks arranged in layers. Rock can form layers in a variety of ways. Volcanoes, wind, or water can produce layers.[4] A detailed discussion of layering with many Martian examples can be found in Sedimentary Geology of Mars.[5] 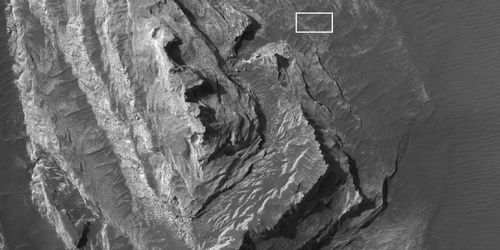 Enlargement of white butte, as seen by HiRISE under HiWish program. Box shows size of a football field.

Holden Crater and Eberswalde Crater (craters in this region) are thought to have once held lakes because they contain deltas and minerals which need water to form.[6] The Uzboi-Landon-Morava (ULM) system of paths for water flow is found in Margaritifer Terra.