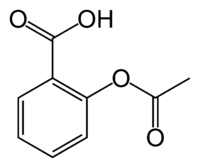 Aspirin is the brand name for Salicylic acid. Its production on Mars would be part of a larger chemical production system, and it can be used as a model for the complexity of the chemical industry that would be required for a Mars Settlement. The chemical formula of Salicylic acid is C7H6O3.

Aspirin could be synthesized from simple precursor molecules using the following synthesis path:

Sodium hydroxide (NaOH) is produced by the electrolysis of sodium chloride(NaCl-table salt) using the Chloralkali process.

It may be more practical to produce aspirin from the bark of the willow tree, that contains the amino acid Phenylalanine. However, this requires the mastery of enzyme catalyzed processes.