From Marspedia
(Redirected from CME)
Jump to: navigation, search 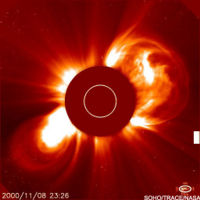 Warning Mars settlers about the onset of damaging ions is therefore a high priority. Even on Earth, predicting CMEs and dangerous ions is very important as a massive current of global scale is applied during solar storms. This effect can damage delicate satellite circuits, thermally expand the upper atmosphere (thickening the atmosphere in low Earth orbit, slowing down satellites and decreasing their orbital altitudes) and even cause damage to power grids on the ground (auroral electrojets can have the effect of overloading country-wide electricity grids).[2] Methods of predicting and detecting Coronal Mass Ejections are constantly being developed, including solar observatories, but the most effective way of detecting the onset of an Earth-bound CME is to have a probe between the Earth and Sun.[3]

However, if the sun is active with flares that could create a CME pointing in the rough direction of Mars, the explorers there should be alert to the danger. e.g. cancel long trips away from the habitat.