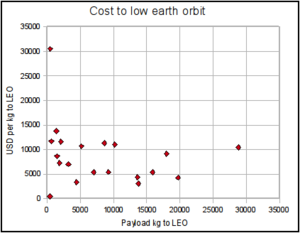 The cost to orbit

This page is a collection of Financial effort estimations. It covers all planning, preparations, material, transport, administration, etc. Funding is needed to make the colonization possible.

There are several stages that can be calculated separately:

Cost per kg from Earth to Low earth orbit (unmanned)

Cost per person from Earth to Earth's orbit

Here the mass of the person with an average of 70 kg is only part of it. Additional mass is calculated for the life support systems. Rockets must be man-rated for them to be used in manned transportation to space.

These huge differences are the result of different mission targets - simple mission of flying to Mars and back (plans by Roskosmos (Russia) - similar to lunar Apollo program) is far more cheaper than permanent setlement or even NASA expediture mission (staying 90 days or about year). Expensivness of current NASA mission plans mostly comes from the fact, that they includes LEO, Moon base stages with 3+ subsequential flies to Mars, with manned ~600 day stay.

SpaceX has presented a number of evolving proposals for their BFR system[2]. The 2016 projection for entirely recoverable twin stage to orbit with orbital refueling was 140$ per kg to Mars surface. The plans have been scaled back somewhat[3], with a 9m core launcher rather than a 12m core launcher, but the costs remain nearly two orders of magnitude under any other projections. These costs are conditional to the production of in-situ propellant for the return of the Mars lander to Earth for re-use.