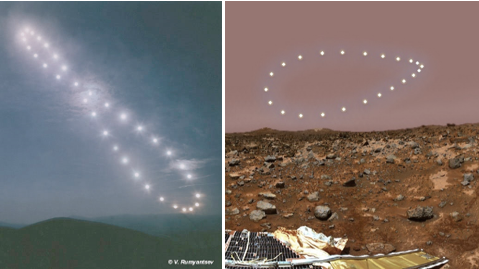 Analemmas representing the position of the Sun at the same time and place each day as seen from Earth (left) and Mars (right). Mars’ more highly elliptical orbit causes its analemma to take a different shape than Earth’s. It also results in higher deviations of apparent and mean solar time: while the timing of local noon may vary by up to 15 minutes on Earth, this variation can reach 50 minutes on Mars.[1]

A Mars solar day (typically referred to as a “sol”) has a length of 24 hours, 39 minutes, and 35.244 seconds.[1] This difference in duration in comparison to an Earth day, while slight, nevertheless warrants careful consideration of how best to tell time on Mars. Although humans have yet to set foot on the planet, the question of time bears relevance for even unmanned spacecraft due to the necessity of daylight for solar panels and the sun’s effect on temperature fluctuations in Mars’ thin atmosphere.[2]

Using Earth time to measure events on Mars would have little practical benefit; even if clocks were initially synchronized between the two planets, the 40-minute time differential per day means that Earth time would rapidly diverge to the point where it had no bearing on the local solar time at Mars. Proposed alternatives to Earth time have included adding a 25th partial Earth hour at the end of each sol, an altogether new system based on powers of 10, and stretching terrestrial measurements to preserve the convention of a 24-hour day. The last of these has been the method which Mars missions have employed to date. [1][2][3]

This system would preserve the length of terrestrial hours, minutes, and seconds, but add an extra partial hour after midnight, and has made fictional appearances in Kim Stanley Robinson’s Mars trilogy,[4] as well as Philip K. Dick’s Martian Time-Slip.[5]

Despite the practicalities of preserving conventions familiar to Earth residents, the partial hour proposal exhibits several disadvantages. This system could potentially require the addition of a leap second every four days, and calculating elapsed time across the partial hour boundary poses mathematical inconveniences (for example, the elapsed time between 23:30 and 01:00 is not an even hour and a half, but a more cumbersome two hours and 10 minutes).[6] Furthermore, a lack of uniformity between hours complicates the process of celestial navigation (specifically, determining one’s longitude by observing the rise of the Sun, Phobos, or Deimos and comparing local time to the expected time of occurrence at the prime meridian).[3]

The proposal of decimal time seeks to use the settlement of Mars as an opportunity to replace Earth’s somewhat unwieldy base-24 and base-60 time system with a sleeker one utilizing units of 10. Earth seconds could provide the basis for such a system: terrestrial time already uses milliseconds and microseconds, and this convention could be extended to kiloseconds (roughly 15 minutes), megaseconds (about 12 days), and gigaseconds (around 32 years).

This proposal looks forward to a time when civilization spans several celestial bodies, with the argument that this standardized form of time would avoid political or social issues arising from prioritizing the use of a system associated with any one planet. A more Mars-centric approach would involve dividing a sol by powers of 10 to yield centidays (around 15 Earth minutes), millidays (roughly one and a half minutes), and microdays (10 microdays being slightly faster than a second).[6]

Whatever the method, the principal advantage of decimal time lies in its ability to facilitate simple calculations by aligning time measurements with the base-10 system of modern Arabic numerals. Changing from seconds to hours (as one might do when converting meters per second to kilometers per hour) involves a factor of 3600, while similar calculations in decimal time only require more straightforward powers of 10. On the other hand, transitions to such a system have failed to meet widespread popular acceptance in the past, such as the unsuccessful attempts made during the French Revolution.[7] Moreover, Mars geographical coordinates already use the same base-60 degrees, minutes, and seconds as on Earth, and existing equations of celestial navigation rely on correspondence between geographical and chronological systems where, for example, one hour/minute/second of time equals 15 degrees/minutes/seconds of longitude.[3]

The system currently in place for telling time on Mars simply divides the solar day by 24 hours to yield familiar hours, minutes, and seconds, each 1.0275 times longer than their terrestrial equivalents. This method has the practical benefits of remaining similar to Earth time without necessitating the inconveniences of an additional partial hour, facilitating understanding of the planet’s orientation toward the Sun (i.e. 6:00 AM means roughly the same thing on both Earth and Mars), and allowing unaltered terrestrial equations of celestial navigation to apply on Mars.[3]

The 1976 Viking Lander missions originally adopted this system,[1] and it has seen use ever since—members of the Mars Exploration Rover mission even utilized custom-made wristwatches with strategically-placed lead weights to slow the movement of the hands to Mars time.[8] The Goddard Institute for Space Studies’ publicly-available Mars24 Sunclock software, which displays Mars time alongside other information such as lander locations and the relative orbital positions of Earth and Mars, uses stretched time as well.[9]

Despite the acceptance of this method of timekeeping, the potential for confusion between Earth units and Mars units does exist. For this reason, it has been recommended that differing terminology should be employed for the two systems.[6] As highlighted above, the scientific community has already adopted a separate word to distinguish Mars sols from Earth days, but other units of time must currently be preceded by “Earth” or “Mars” to establish clarity.

As mentioned above, comparing the occurrence of sunrise and moonrises at local time to their expected occurrences at the prime meridian provides an accurate method to assess longitude. But where does one define the prime meridian on an extraterrestrial planet? On Mars, the definition of longitude 0° was originally set in 1877 based on the region Sinus Meridiani, and later refined to a specific crater named Airy-0. Recent proposals have suggested fixing the prime meridian at 47.95137° east of Viking Lander 1, a more precisely-defined location approximately at the center of Airy-0.[1][10][11].

Rather than globally-defined time zones, Mars missions have traditionally used estimates of local solar time at the landing site, as was the case on Earth prior to the adoption of standard time in the 19th century.[1] Even so, creating time zones on Mars as was done on Earth by dividing the planet’s surface into longitudinal sections and offsetting the time from that established at a given point remains a possibility. The Mars24 Sunclock illustrates this with 15° sections offset from the prime meridian at Airy-0, where mean solar time is referred to as “Airy Mean Time” (AMT).[1]