Transportation infrastructure may be in settlement and out of the settlement. The Spaceport is probably going to be an important facility, part of the Mars settlement folklore. 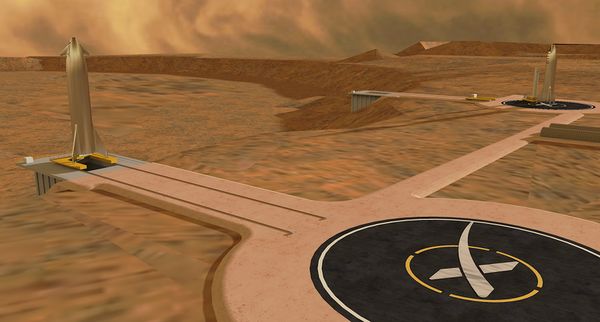 Spaceport with two landing and launch pads. Any number of arrangements would be possible. In this illustration the presence of a crater wall allows for a simplification of blast trench construction.

Although the hot exhaust from the engines loses its power rapidly, rocks and pebbles thrown up by the launch might be dangerous for a very long distance. In particular, the low martian gravity lets ejected rocks move further than on Earth.

Precision landing may be more difficult than expected, so a well defined spaceport, as illustrated, may not be possible. Rapid re-fuelling would be required to allow for a quick turn-around and maximum use of the spaceport during the relatively short synodic conjunction. Alternatively, the ships can stay on Mars for an entire synod, white their return propellant is being produced.

An explosion on the launch pad is a possibility that needs to be addressed by moving the spaceport away from the settlement and separating the launch positions.

As the Mars settlement grow, it will probably rapidly grow beyond comfortable walking distances, and require an internal transportation network. Personal Rapid Transit is a possible solution to the question of transportation inside the Martian Settlement.

A settlement would need to build roads to reach resources and transport them using Rovers and wheeled vehicles.

However the roads might be dirt roads, since there is no asphalt on Mars. Concrete roads would be possible, but the requirement needs to clearly identified. Flat dirt roads can be used for high velocity travel. The lack of soil and water on Mars would mean the roads would be fairly easy to build and would last a long time, since there would be little erosion.

Some of the surface of Mars may be too hard to serve as a road directly. Damage to Mars rover wheels have shown that some of Mars' surface is made of sharp rocks. These areas would need to be modified, possibly broken into gravel for easy operation. 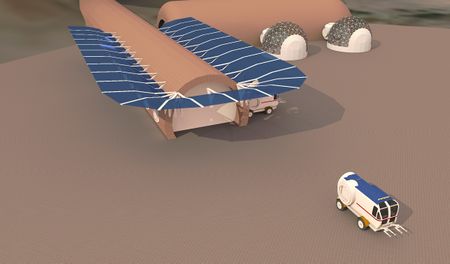 A terminal for vehicle parking. 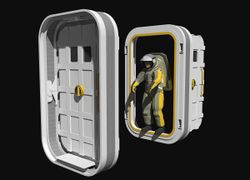 The multiple access ports illustrated in the image would probably be needed only for a very large colony. Advances in self driving vehicles should allow for parking remotely and connecting only as required, so such a terminal could handle a very large amount of traffic. A rectangular large docking port might be a fairly early requirement. Existing docking ports are small and poorly adapted to operation in gravity conditions. Berthing ports are larger, but the complications of the berthing process may not be adequate for surface vehicle.

Connecting two vehicles and providing an airtight seal may be a complex process. The internal pressure on the seal will be significant, and the connector may require some kind of semi autonomous latching system. Some form of electronic or mechanical interlock will be required to ensure that a vehicles does not leave until the inner hatch is closed.

Exterior vehicles will require maintenance. Martian dust is fine and may damage quickly rotating parts so maintenance is bound to be required. Radiant heat could be used in an early un-pressurized garage to keep elements in the vehicles above their freezing point. Parts, lubricants would probably come from Earth. Mining operations are very hard on equipment and regular maintenance is an important part of the operations. 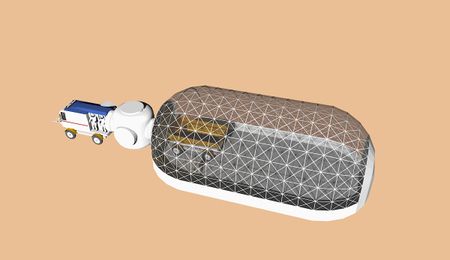 Maintenance facilities. This might be a simple, light unpressurized enclosure with radiant heating, or a robust pressurized facility.

Railways may be used on Mars for a number of transportation activities.