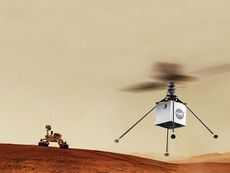 Artist's conception of NASA's Mars Helicopter planned for inclusion on the Mars 2020 mission.

Helicopters have now flown on Mars. Achieving heavier-than-air flight on the planet faced several obstacles, chief among them the low atmospheric density as compared to Earth. With the demonstration of the feasibility, they may fill a gap between ground-based and orbital exploration, offering aerial reconnaissance and light payload transportation capabilities to rover missions. Farther in the future, manned exploration may similarly benefit from semi- or fully-autonomous helicopter support. A proof of concept flight model, the Mars Helicopter, Ingenuity, has flown in NASA’s Mars 2020 mission.

Future helicopters operating on Mars would provide a variety of benefits. Whereas the cameras or sensors of satellites must operate from hundreds of kilometers above the planet, skimming over the surface at altitudes ranging from tens to hundreds of meters offers the possibility of collecting data which cannot be obtained from orbit.[1] For example, higher-resolution imagery from these heights may reveal dangers or optimal paths for exploration which would not be evident from satellite photos, thereby improving the efficiency and safety of manned and robotic expeditions on the surface.

While manned exploration of Mars may lie in the relatively distant future, supplementing existing rover missions with aerial support offers more immediate advantages. A flying platform could cover large areas which would be prohibitively time-consuming for its rover companion, or carry instruments and cameras over steep or rough terrain too difficult for exploration by land-based robots.[1] It could also carry small payloads, deploying multiple scientific instruments over a tract of land[1] or ferrying samples from the collection site to a Mars ascent vehicle for return to Earth.[2]

Once humans set foot on the planet, helicopters could continue to act as advance scouts in much the same way as for rovers, exploring terrain too difficult or time-consuming for manned exploration and aiding in the search for resources.[1][3] Furthermore, they could offer a rapid delivery system for emergency supplies or parts for repairs.[1] All of these tasks, particularly if automated with the help of machine learning, would reduce the man-hours required of early settlers and explorers, who will be few in number and whose labor can then be directed towards other projects.[1] 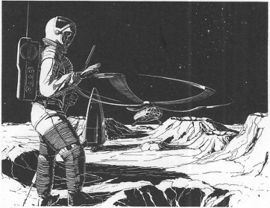 1960s concept art of a helicopter employing tip-jet rotor propulsion. Later discoveries regarding the thin nature of Mars’ atmosphere revealed such a design to be unfeasible, as a manned vehicle of this style would likely be too heavy to function.[4]

The implementation of helicopters on Mars faces several challenges, the most daunting of which being the fact that Mars’ atmosphere is substantially thinner than that found on Earth. Mars' atmospheric density on the surface is roughly 60 times less than Earth's, while its mean surface pressure is 160 times less.[5][6] To offer a practical point of comparison, the highest recorded flight reached by helicopters on Earth lies around 40,000 feet—even on the surface of Mars, a craft would start from the equivalent of 100,000 feet in altitude on Earth.[7] The corresponding decrease of gravity (38 percent of that on Earth) does not fully offset the thinner atmosphere,[8] meaning that only recent innovations in lightweight electronics and battery technology have rendered the possibility of a helicopter capable of lifting its own weight feasible.[1]

In addition to the difficulties of generating lift in such a thin atmosphere, the communications delay between Earth and Mars (from 4-24 minutes, depending on the planets’ relative orbital positions[9]) make manual piloting an impossibility for any human not themselves present on the planet,[1][10] and the lack of a major global magnetic field means the helicopter cannot use a compass for navigation.[11] Finally, a helicopter must be able to overcome all of these obstacles with materials capable of withstanding the g-forces and vibration of a rocket launch from Earth, as well as the sub-100 degrees Fahrenheit nighttime temperatures.[1] 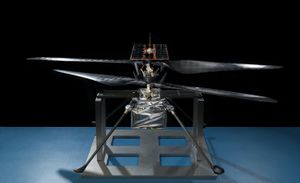 The Mars Helicopter will arrive attached to the underside of the Mars 2020 rover.[3]

Despite the impediments to such a mission, the Mars 2020 rover carried a prototype helicopter to test the feasibility of future flights on Mars. In January 2019, NASA’s Mars Helicopter successfully completed a flight in a simulated Mars environment, with the thin atmosphere replicated via a vacuum chamber[3] and the low gravity simulated via a motorized lanyard which pulled up on the craft as it flew.[12] Carrying no scientific instruments, the helicopter’s primary objective will consist solely of replicating this success on the red planet and thereby demonstrate the feasibility of powered flight for future missions.[1][3]

The helicopter itself weighs less than 4 pounds (1.8 kilograms) and sports two 4-foot (1.2 meter) long counter-rotating coaxial rotors. This design was chosen over a tail rotor due to considerations of the available space on the rover.[1] The blades themselves will spin about 10-times faster than those of an Earth helicopter, at 2,300-2,900 revolutions per minute.[1] Other features include an in-built solar panel for charging,[1] a heating mechanism to counteract frigid nighttime temperatures,[10] a solar tracker camera for navigation,[11] and the ability to receive commands from the ground before carrying out the flight autonomously.[10] 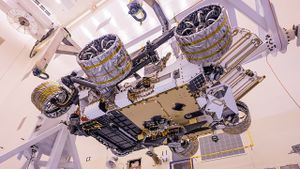 The Mars Helicopter, visible in the lower center of the image, attached to the underside of Perseverance.

After arriving at Mars attached to the underbelly of the rover, the helicopter will detach at a suitable take-off site some 60-90 days after landing.[2][10] The rover will then separate itself from the helicopter by a minimum safe distance of 100 meters, initiating a 30-day test consisting of up to 5 flights of increasing distance and complexity.[2][10] The first of these will involve hovering at 10 feet (3 meters) for 30 seconds, and subsequent flights will last up to 90 seconds while remaining within a 1 kilometer radius of the rover for radio signaling purposes.[2]

Ingenuity's 2021 flights constitute the first flight of a heavier-than-air aircraft on Mars.[1] This will pave the way for larger helicopters, with current Mars lander designs permitting craft weights of an estimated 20-30 kilograms (44-66 pounds) and payload capabilities of 0.5-2 kilograms (1.1 to 4.4 pounds).[1]