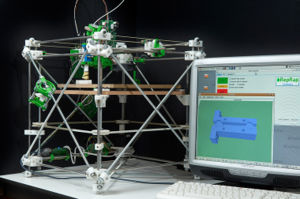 3D printing , also known as Rapid Prototyping and additive manufacturing, is a technology of creating objects layer-by-layer. It will make it possible for the Mars settlement to fabricate items from in-situ materials. 3D printers used to depend on highly processed plastics and metals but the field is advancing very fast. 3D printing technology is quickly getting cheaper and faster, as 3D printers are getting available for only a few hundred dollars. Advanced 3d printers may be able to print electronics with high precision if the sophisticated raw materials for these electronics (such as copper and silicon) can be made available in purified form.

If Martian materials can be used for fabrication, then a single 3D printer can be sent instead of many items, thus saving valuable mass. 3D printers have been tested on the ISS, so in conditions that are more difficult than on Mars.

NASA has been sponsoring a competition for large scale additive manufacturing to create habitats for a martian base[1].

Additive manufacturing, as of 2018, can use the following metals[2]:

As well as the following plastic materials:

All the materials required for additive manufacturing are available in-situ on Mars. The following might be the ones the most interesting to develop:

Plastics are not available directly but can be manufactured, using a number of intermediates steps, from atmospheric CO2 and water from the martian regolith.