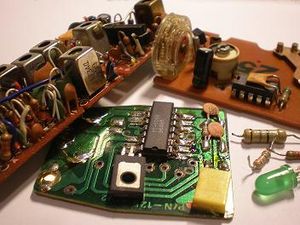 Printed circuit boards with a variety of electronic elements

Electronics is a technology for automation and the basis for modern information technology. For remote controlled explorations and during the setup phase of a settlement on Mars it is required for radio link and data processing.

This is the oldest kind of electronics. It is made from glass and metal. Compared with semiconductor electronics the tubes are big, power consuming, but they are easy to produce. They are radiation-proof, which makes them suitable for long term applications under Martian environmental conditions. Nevertheless, the wear lifespan is limited by abrasion of the heating electrode.

This is the modern kind of electronics. It allows ultra-compact devices with low power consumption, but it requires a hi-tech industry to produce the material and the structures. Since the material is damageable by radiation, it must be shielded carefully and has a limited wear lifespan depending on the intensity of the radiation. The electrical parameters are strongly influenced by the temperature.

Semiconductors require large quantities of energy to refine the materials to the required degree of purity. Therefore until the settlement is large enough to have large amounts of available energy it may be required to import electronics. As the settlements grows more independent, it will require less transportation from Earth. Energy will then become available for other uses as the fraction of settlement resources dedicated to propellant production goes down. Eventually local semiconductor production will become economically viable. Note that chips with hundreds or a few thousand transistors per chip, are much easier to produce than modern semiconductors with millions of transistors per chip. Such primitive semiconductors are also more resistant to radiation.

If semiconductors fabricated in Earth orbit become available, it would seem logical that a facility could be built in Mars orbit as well.