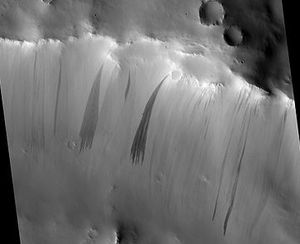 Dark slope streaks are found on Mars on dust-covered slopes often near the equator; they are believed to be avalanches involving bright Martian dust moving down slope and exposing the dark underlying rock.

Dark slope streaks are found on dust-covered slopes, particular near the equator.[1] They have never been observed on the Earth.[2]

The streaks start out only about 10% darker than their surrounds [3] (This is confused because many images of the streaks have been post-processed to bring out more detail and appear much darker). Over time these streaks tend to get lighter as the brighter Martian dust settles from the atmosphere. The darker ones are the newest.

Typically, streaks begin at a small point high on a steep slope, such as a crater wall.[4] And then they greatly widen and sometimes divide into finger-like extensions (digitation). Obstacles, such as boulders, may cause an individual streak to split into two separate streaks or eventually form a braided (anastomosing) pattern.[5] Many have a fan shape. [6]

Streak being affected by boulders. Arrows indicate boulders and resulting effect on streak.

Thanks to the many excellent cameras that we have placed in orbit over many decades, we have a history of how the Martian surface changes. Dark slope streaks are some of the most changing parts of Mars. They were discovered in Viking Orbiter pictures from the 1970.[10] [11] When images from Mars Global Surveyor (MGS) and Mars Reconnaissance Orbiter (MRO) spacecraft are compared, the life history of streaks can be precisely determined.[12] [13] [14] [15] [16]

One analysis concluded that 70 streaks per day may form on the planet. The research team compared overlapping images from Mars Global Surveyor Mars Orbiter Camera that were spaced days to years apart. [17] Dark slope streaks are constantly forming and fading. The darker ones are the youngest. Fading is accomplished by settling of bright dust in the Martian atmosphere. When researches looked at a small area (Lycus Sulci) on Mars with both Viking images and recent CTX images from the Mars Reconnaissance Orbiter, they found that the ones seen in Viking photos were gone, however, new streaks have taken their place. Their calculations indicated that slope streaks last about 40 years [18]

It is believed that during Mars' global dust storms many - perhaps most - streaks and other features are erased during these occosional occurences.[19] [20] 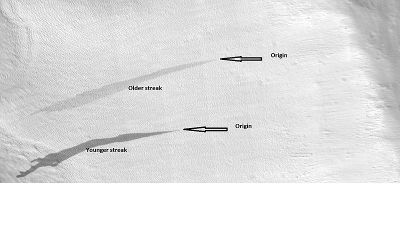 Although many ideas have been put forward to explain slope streaks, the general opinion today is that they are simply avalanches of darker colored dust.[21] Nearly all of Mars is covered with a thin, bright dust. On steep slopes this layer of dust can move away and reveal a dark surface. The dark volcanic rock basalt lies under the lighter-toned dust which falls out of the atmosphere. With the long term observations from orbit, researchers have noticed that strikes by meteorites can start the process of slope formation.[22] [23] Moreover, even the air blast from an oncoming strike can trigger clusters of slopes to form.[24]

Although event like meteorite impact nearby can trigger the formation of streaks, surface temperature and wind velocity may be connected to dark slope streak formation. This conclusion was described in a recent article in the journal Icarus.[25] 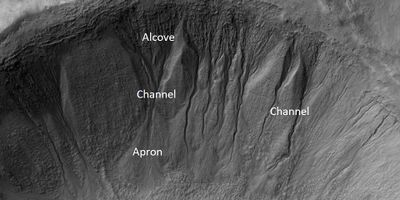 Image of gullies with the parts "alcove", "channel", and "apron" labelled. Picture was taken by HiRISE under HiWish program.

Several features are common on slopes on Mars. The surface of Mars is billions of years old in most places. Consequently, it has accumulated many steep slopes, especially in craters and canyons. Although streaks, gullies, and recurring slope lineae all occur on slopes, they have different origins. Martian gullies show up in certain zones. However, unlike dark slope streaks they go fairly deep into the surface and are not erased by falling dust over time. Their origin is still debated. For over a decade they were believed to be formed by recent, flowing water. [26] [27] [28] [29] Now, new observations suggest that gullies are being made today by chunks of dry ice moving down steep slopes in the spring. [30] [31] [32] [33] [34] [35] [36] [37]

Gullies and streaks are found in different areas on the planet. While the streaks are towards the equator, gullies are often found in the middle northern and southern hemispheres.

Like gullies and streaks, recurring slope lineae are seen on steep slopes, but they are smaller, more narrow, and straighter. Since they seem to lengthen as the temperature increases, they were believed to be involved with liquid water. [38] [39] [40] [41] [42] Nevertheless, later studies showed that very little water, if any, could be involved.[43] [44] [45] [46] As more and more observations were gathered, researchers leaned more and more to liquid water not being involved with these types of streaks. Since there are more streaks when more dust devils are present, researchers think wind may be involved.[47] ,ref>McEwen, A., et al. 2021. Mars: Abundant Recurring Slope Lineae (RSL) Following the Planet‐Encircling Dust Event (PEDE) of 2018. JGR Planets</ref> 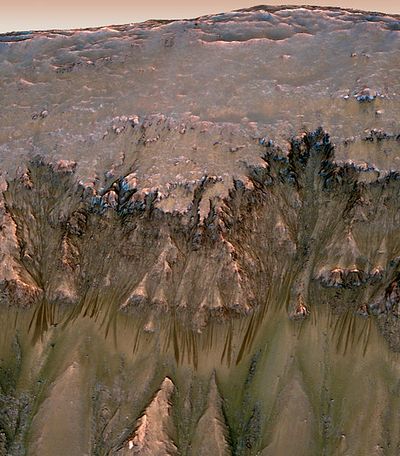