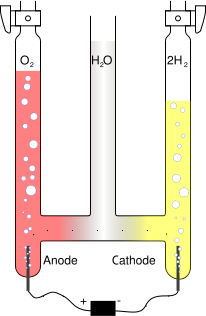 Electrolysis is the process of separating a chemical compound by passing an electrical current through it, either molten or in solution.

By applying a voltage across two electrodes immersed in the liquid, an electric field is set up, causing separation of ions in order to maintain electrical equilibrium. For instance, water can be separated into hydrogen from oxygen, with the negatively charged hydroxide ions OH- drawn to the positive electrode and the positively charged hydronium ions H3O+ drawn to the negative electrode. When arriving at the electrodes the ions are discharged and become gaseous oxygen and hydrogen respectively. The net effect of of the migration of ions is identical to the flow of an electric current through the liquid.

Electrolysis is a common industrial process, used in the production of:

There are a number of other industrial processes which are based on the same principle.

Water is available in large quantities on Mars. Electrolysis can be used to produce oxygen as part of the atmosphere required for an artificial habitat. The oxygen can also be used in a propulsion system. The hydrogen produced can be used for hydrocarbon synthesis, yielding synthetic materials for space suits etc. However, the main use for the electrolysis of water is likely to be propellant production.

Electrolytic cells for hydrogen production have an efficiency of about 70-80%. They may eventually reach 96%. Preheating the water increases the efficiency of the electrolysis process. Combining electrolysis with the high temperature requirements of the Sabatier process (400°C) can improve efficiency. Using waste process heat might be an interesting alternative.

The three main technologies under development are[1]:

An electrolyte is usually required to increase the conductivity of water and increase the reaction rate. Both acid and basic solutions are possible. A solid polymer electrolyte can also be used such as Nafion and when applied with a special catalyst on each side of the membrane can efficiently split the water molecule with as little as 1.5 volts. There are also a number of other solid electrolyte systems that have been trialed and developed with a number of electrolysis systems now available commercially that use solid electrolytes[2].

Aluminum electrolysis is presently accomplished using the Hall-Heroux process. Aluminum producers and Apple computers have announced a new process that does not produce CO2 and therefore does not require carbon anodes.[3]