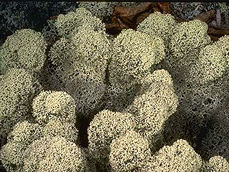 Lichen is an important food source for reindeer and some species of moth. Rock tripe is a species of that is eaten by humans, and is used in the cuisine of Korea. Chemicals produced by certain species are useful in medicine and industry. They are also important as they can slowly digest rocks, making their nutrients accessible to the biosphere.