Algae in algaculture with bubbles of oxygen 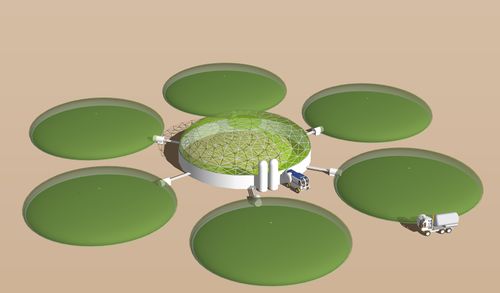 A conceptual aerated tank farm of the surface of Mars. The thermal inertia of water should prevent the tanks from freezing, and the use of infrared reflective membranes and multiwalled tanks could allow the heat to build up to useful temperatures. Very hypothetical.

Algae are a diverse group of organisms, ranging from ten meter long kelp to unicellular dinoflagellate. These organisms are a vital link in many food chains on Earth. The farming of algae is called algaculture.

Open pools are similar to the natural environment of many species of algae.

Aerated tanks provide a controllable environment which can be tuned to the exact conditions needed by the target species.

Algae are an excellent source of vitamins, oils, fatty acids, and minerals, and are eaten in many parts of the world. They can be grown in tanks filled with waste water, and aerated with CO2 from the martian atmosphere. A welcome side effect is the release of free oxygen.

Algae is currently used on Earth as a fertilizer.

Certain species of algae can be grown to produce hydrogen and hydrocarbons.

Special algae produce light.[1] If placed in a sun-lit room, it produces oxygen and proteins during the day. At night it consumes part of the previously produced substances and gives a little light for the settlers, not for other plants to grow. I can imagine those lamps can be useful as an emergency illumination, or may be, if regularly carried towards the living quarters in the evening, as an alternative lighting technology for the living quarters.

All algae feed off CO2 as well as sunlight to produce hydrocarbons for their structure and to store energy in oils, fats and sugars.[2] Oxygen is a byproduct of photosynthesis. CO2 production can continue the dark and can help to clean the air in the Martian settlement.

A large support infrastructure to produce the necessary fertilizers, clean the water, control the plants genetics, gather the algae and control the environment would be required.