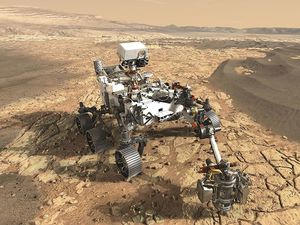 Mars 2020 is a Mars rover mission by NASA's Mars Exploration Program which was launched on 2020, July 30th, and landed successfully on 2021, February 18th.

The Mars 2020 rover was named Perseverance was announced by NASA on 4 December 2012 at the fall meeting of the American Geophysical Union in San Francisco. The rover's design will be derived from the Curiosity rover, but will carry a different scientific payload. Nearly 60 proposals for rover instrumentation were evaluated and, on 31 July 2014, NASA announced the payload for the rover.

It includes a small coaxial helicopter Ingenuity, which successfully completed it mission in May 2021.

The rover is planned to be launched in 2020. based on scientific objectives set one year earlier. Precise mission details will be determined by the mission's Science Definition Team.

In May 2017, evidence of the earliest known life on land may have been found in 3.48-billion-year-old geyserite, a mineral deposit often found around hot springs and geysers, uncovered in the Pilbara Craton of Western Australia.

The mission is part of NASA's Mars Exploration Program, and it is planned to explore Jezero Crater for a Martian year (1 sol = 687 Earth days).

On 9 July 2013, the Mars 2020 Science Definition Team reiterated that the rover should look for signs of past life, collect samples for possible future return to Earth, and demonstrate technology for future human exploration of Mars. The Science Definition Team proposed the rover collect and package as many as 31 samples of rock cores and soil for a later mission to bring back for more definitive analysis in laboratories on Earth, but in 2015 the concept was changed to collect even more samples and distribute the tubes in small piles across the surface of Mars. However, returning the samples to Earth would likely require two additional missions: one rover to land on Mars, take the samples collected by Mars 2020, and launch them into Mars orbit; and another to collect the sample canister in Mars orbit and return it to Earth. Neither of those missions is under development by NASA,

In September 2013 NASA launched an Announcement of Opportunity for researchers to propose and develop the instruments needed, including a core sample cache.

The rover can make measurements and technology demonstrations to help designers of a human expedition understand any hazards posed by Martian dust, and will test technology to produce oxygen (O2) from Martian atmospheric carbon dioxide (CO2).

As proposed, the rover will be based on the design of Curiosity. While there will be differences in scientific instruments and the engineering required to support them, the entire landing system (including the sky crane and heat shield) and rover chassis can essentially be recreated without any additional engineering or research. This reduces overall technical risk for the mission, while saving funds and time on development.

A Multi-Mission Radioisotope Thermoelectric Generator, left over as a backup part for Curiosity during its construction, will power the rover.

The rover mission and launch is estimated to cost about US$2.1 billion.

In October 2016, NASA reported using the Xombie rocket to test the Lander Vision System (LVS), as part of the Autonomous Descent and Ascent Powered-flight Testbed (ADAPT) experimental technologies, for the Mars 2020 mission landing.

The following locations are the eight landing sites that were under consideration for Mars 2020 previous to the meeting in Pasedena, California Feb 2017.

A workshop was held on 8–10 February 2017 in Pasadena, California, to discuss these sites, with the goal of narrowing down the list to 3-4 final sites for further consideration.

The Jezero Crater was eventually selected.

In reaction to the announcement, California U.S. Representative Adam Schiff came out in support of the Mars rover mission plans, saying that "an upgraded rover with additional instrumentation and capabilities is a logical next step that builds upon now proven landing and surface operations systems."

NASA's science chief John Grunsfeld responded that while it could be possible to launch in 2018, "it would be a push." Grunsfeld said a 2018 launch would require certain science investigations be excluded from the rover and that even the 2020 launch target would be "ambitious."

Space educator Bill Nye added his support for the planned mission saying, “We don't want to stop what we're doing on Mars because we're closer than ever to answering these questions: Was there life on Mars and stranger still, is there life there now in some extraordinary place that we haven't yet looked at? Mars was once very wet—it had oceans and lakes. Did life start on Mars and get flung into space and we are all descendants of Martian microbes? It's not crazy, and it's worth finding out. It's worth the cost of a cup of coffee per taxpayer every 10 years or 13 years to find out.” Nye also endorsed a Mars sample-return role, saying “The amount of information you can get from a sample returned from Mars is believed to be extraordinarily fantastic and world-changing and worthy."

The selection has been criticized for NASA's constant attention to Mars, and neglecting other Solar System destinations in constrained budget times. Contrary to usual NASA practices, the mission was approved for flight before a Science Definition Team (SDT) had been formed to decide on the mission's purpose and goals.