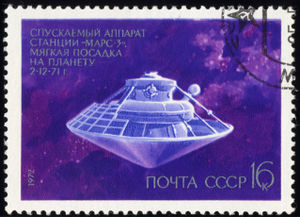 Launched on 28 May 1971, Mars 3 was the sister mission to Mars 2. It consisted of an orbiter, lander and rover.

The lander is generally regarded to have been the first man-made artifact to perform a soft touchdown to the Martian surface. The landing took place during a dust storm. The lander started to send the first picture from the landing surroundings, but the transmission failed after 14.5 seconds. The partially transmitted picture showed no details, probably caused by dust storm effects. There has been some debate as to whether or not the soft landing was actually successful, however.

It was not possible to deploy the rover.

The orbiter part of the mission was a success and returned photographic data.