Many features on Mars contain large amounts of ice. Many of these have formed beautiful forms. The most popular model for the origin of the ice is climate changes caused by large changes in the tilt of the planet's rotational axis.[1] At times the tilt has even been greater than 80 degrees. [2] [3] Large changes in the tilt explains how some places on Mars accumulated ice. Studies have shown that when the tilt of Mars reaches 45 degrees from its current 25 degrees, ice is no longer stable at the poles. [4] Furthermore, at high degrees of tilt, stores of solid carbon dioxide (dry ice) sublimate, thereby increasing the atmospheric pressure. Under current Martian atmospheric conditions both water ice and dry ice sublimate, that is they change directly from a solid phase to a gas phase. Increased pressure from higher carbon dioxide levels allows more dust to be held in the atmosphere. Moisture in the atmosphere will fall as snow or as ice frozen onto dust grains. Calculations suggest this material will concentrate in the mid-latitudes. [5] [6] General circulation models of the Martian atmosphere predict accumulations of ice-rich dust in the same areas where ice-rich features are found. [7] When the tilt begins to return to lower values, the ice sublimates (turns directly to a gas) and leaves behind a lag of dust. [8] [8][9] The lag deposit caps the underlying material so with each cycle of high tilt levels, some ice-rich mantle remains behind thereby insulating and preserving ice. [10] Note, that the smooth surface mantle layer probably represents only relative recent material.

Note that for those periods when the Martian axial tilt is over 45 degrees, water and carbon dioxide ice tend to migrate during a Martian year from the North Pole, to the South (and back again) each year. This puts more CO2 and water vapour in the atmosphere, resulting in the Martian climate being warmer with a higher air pressure during these geologic periods.

Using the ever increasing resolution of cameras orbiting Mars, we have discovered that many parts of the planet are covered by a smooth coating that in some cases is layered and quite thick. [11] Some parts are eroded, revealing rough surfaces. Some parts possess layers. It’s generally accepted that mantle is ice-rich dust that fell from the sky as snow and ice-coated dust grains during a different climate.[12] Latitude Dependent Mantle and many other supposed ice-rich features occur in two rather wide latitude bands in the mid-latitudes: 30-60 degrees North and 30-60 degrees South latitudes. There are many features with layers that may have been deposited as latitude dependent mantle in past times. Later they were sculptured by winds into strange, beautiful shapes. Some are in craters; others are leaning against steep walls.

Satellite observations show features that look like glaciers. It is believed that ice is flowing under a thin cover of debris. Although ice is not stable at many latitudes of Mars, ice could survive for long periods under a few meters of dirt and rock. Many of these supposed regions of underground ice generally begin around 30 degrees of latitude on both sides of the equator. In other words latitudes greater than 30 degrees may have glaciers. [13] In other words, glaciers are expected at 40 degrees north, but not at 10 degrees north. Some bare an uncanny resemblance to alpine or mountain glaciers of the Earth. These, supposed alpine glaciers, have been called glacier-like forms (GLF) or glacier-like flows (GLF). [14] [15] Another, more general term sometimes seen in the literature is viscous flow features (VFF). [16]

A sign that the Martian climate has changed was discovered early on in the northern ice cap of Mars. It displays many layers of ice that accumulated when the climate changed. These are visible in the walls of canyons.

Brain terrain is a region of maze-like ridges 3–5 meters high. Brain terrain probably stars when cracks form in ice-rich ground—ground that was produced when the climate was different. Along the cracks there is increased sublimation of ice. As more and more ice disappears by sublimation, the cracks widen. Some ridges may consist of an ice core, so they may be sources of water for future colonists.[17] 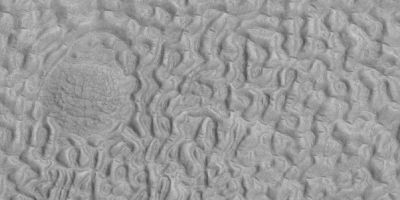 Ribbed terrain forms as ice leaves the ground along cracks in a process called " sublimation." So much of the ground is ice that when the ice disappears the ground collapses. The ice goes into the atmosphere. Dust left behind is eventually just blown away, leaving wide valleys and hollows.[18]