From Marspedia
(Redirected from Polymers)
Jump to: navigation, search

A polymer is a large hydrocarbon based molecule. Each polymer is made up of one or more simple molecules which are linked into a complex, possibly repeating structure. It may linear or branched.

Most polymers are organic molecules and are based on carbon chains. Inorganic polymers exist, based on Silicon or other elements. There is a near infinite variety of polymers, both natural and synthetic. Carbohydrates, proteins, amino acids, DNA, cellulose and lignite are all natural polymers. Polyurethane, polyethylene and other plastics are synthetic polymers.

Carbohydrates are polymers that include Carbon, hydrogen and oxygen. Their generic chemical formula is Cm(H2O)n. 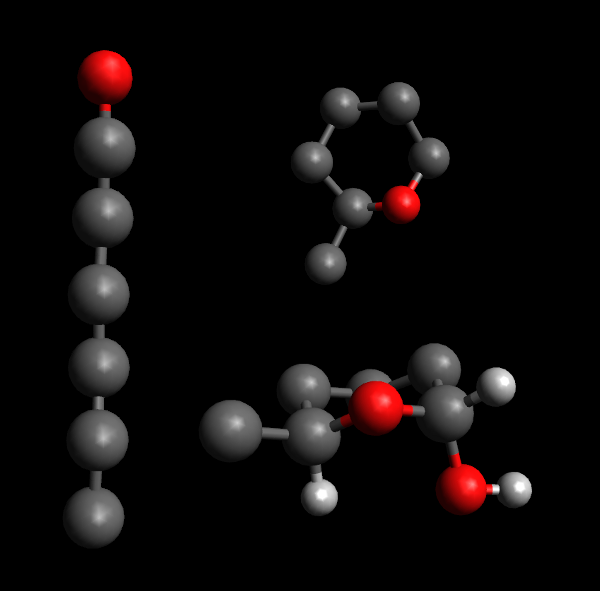 Left: a chain of carbon as in glucose, with an oxygen attached to the anomeric carbon.
Top right: the structure is rolled into a pyranose ring.
Bottom right: The tail structure sits next to a hydrogen atom, on opposite sides of the plane of the pyranose ring. This is alpha-glucose as the hydroxyl group attached to the anomeric carbon is on the "down" side of the ring. Other hydrogen atoms and hydroxyl groups have been omitted for clarity.

Polysaccharides polymers are generally sugars.
In the simplest case where two sugar molecules are linked together, this is called a disaccharide. For example, common table sugar (sucrose) is a disaccharide made of one glucose and one fructose molecule linked together, while maltose is a disaccharide made of two glucose molecules linked together.
Polysaccharides can be described in terms of which sugars they are made from, how adjacent sugars are oriented relative to one another and which of their carbon atoms take part in the link. Before we go into detail, remember that each sugar is made up of a chain of carbon atoms, one end of it (the so-called anomeric carbon) attached to an oxygen atom which is also attached elsewhere on the chain to form a ring-with-tail structure. Each of the carbon atoms then have hydrogen atoms or hydroxyl-groups attached to its remaining bonds (one of each in most cases)[1].
In essence, a link is an alpha-link if the OH-group next to the oxygen in the ring (the one attached to the anomeric carbon) is on the opposite side of the ring's plane from the "tail" of the sugar, while it is a beta-link if on the same side[2]. The carbon atoms in a monosaccharide are numbered from 1 for the anomeric carbon and continuing along the chain, so cellulose can be denoted as a chain of glucose with

links. All "glycosidic" links (the links that make up disaccharides and polysaccharides) connect an anomeric carbon of one monosaccharide to a different carbon of another or the same kind of monosaccharide[1].

Saccharides can link together to form even longer molecules, such as cellulose. A common polymer in plants (often just called "fibre" by the food industry). Plants create cellulose by reacting glucose molecules with one another to link them into a long chain. Chitin, shellac, lignin, silk and rubber are other examples of natural polymeric materials.

Fats molecules are mainly composed of carbon and hydrogen, and thus are forms of hydrocarbons. Fats are more energy dense than carbohydrates or proteins.

Proteins are biological molecules. They are assemblies of amino acids, that are themselves assemblies of Carbon, Hydrogen, Oxygen and Nitrogen with some other trace elements.

Plastics, and other synthetic materials are polymers fabricated from simpler hydrocarbons, such as ethylene for polyethylene.

As Mars does not have a biosphere, there are probably no existing polymers on Mars. All polymers will need to be imported and fabricated in the context of a martian settlement.