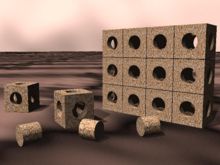 Sintered regolith has been proposed as a construction material on the Moon. This technology might be extended to Mars. Sintering is the fusion of mineral particles through the application of heat. The particles are heated just enough to induce fusion, but not enough to fully melt.

Ceramic objects are produced by sintering natural and artificial ceramics, held in place by binders that are evaporated in the sintering process. However sintering can be done directly without water. As the moon is dry water binders may be problematic. On Mars, water should be readily available and ceramic production may be possible by methods similar to those used on Earth.

Solar energy can be focused on the regolith to achieve the 1300 degree C temperature required for sintering.

A microwave can be used to heat regolith.

Large kilns are used to heat the regolith as it is held in a mould.

Furnace sintering is the classic method for producing ceramic goods on Earth. However, these are held together with binders that are evaporated during the sintering process.

On Mars, binders don't need to be added to the regolith. "Here we demonstrate that by applying exclusively Martian resources a processing route involving suspensions of mineral particles called slurries or slips can be established for manufacturing ceramics on Mars. We developed water-based slurries without the use of additives that had a 51 wt. % solid load resembling commercial porcelain slurries in respect to the particle size distribution and rheological properties. These slurries were used to slip cast discs, rings and vases that were sintered at temperatures between 1000 and 1130 °C using different sintering schedules, the latter were set-up according the results of hot-stage microscopic characterization. The microstructure, porosity and the mechanical properties were characterized by SEM, X-ray computer tomography and Weibull analysis. Our wet processing of minerals yields ceramics with complex shapes that show similar mechanical properties to porcelain and could serve as a technology for future Mars colonization. The best quality parts with completely vitrificated matrix supporting a few idiomorphic crystals are obtained at 1130 °C with 10 h dwell time with volume and linear shrinkage as much as ~62% and ~17% and a characteristic compressive strength of 51 MPa."[1]

Practically any material than can be produced in particle form can be sintered. Ceramics, minerals, glasses and metals are all possible candidates.

Sintered Regolith blocks are a possible construction material. Further testing is needed to determine the structural characteristics of such blocks. Possibilities include Universal bricks and arch segments.