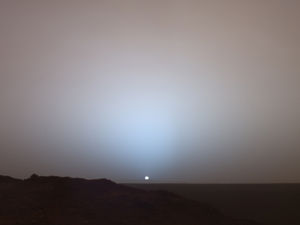 Mars at one time had a much thicker atmosphere, see Atmospheric loss for what happened to this thick atmosphere.

The color of the sky is usually reddish or salmon coloured due to the dust suspended in it. However, at times when the sky is very dust free, it can be blue, for the same reason that the Earth's sky is blue. (Red light is scattered more, so more blue light makes it down to the ground.) The sky may also be blue at sunset due to the fine dust scattering the other colors, leaving a blue color near the sun.

Carbon dioxide clouds require very cold conditions and are normally found high in the atmosphere (50 to 100 km). These form in the mesosphere, usually over the equator, and usually at night. They tend to be thin and hazy. However, at polar winters, the sun does not rise for months at a time; the air there gets very cold. Then carbon dioxide fogs appear, and very fine carbon dioxide snow falls on the polar cap. These clouds are more extensive and are low to the ground (from 0 to 25 km).

It is rare for the primary constitute of an atmosphere to form clouds. (This only happens on Mars, Triton and Pluto.) The freezing of the atmosphere during winter (especially the southern winter) causes the air pressure to vary significantly during each year.

CO2 clouds cool the planet (reflecting light away from the world), and warm it (blocking infrared radiation from leaving). On the whole, CO2 clouds seem to have a net warming effect. Early in Mars' history, the higher air pressure would have made CO2 clouds more common, and this warming may have been of more significance.

Clouds on Mars are usually formed of ice particles, rather than water droplets. Thus most martian clouds are variations of cirrus clouds.

--- Aphelion Cloud Banks (ACB) are clouds which form in the northern spring and summer from moisture coming from the warming South Pole. A Hadley cell forms, where rising air from the south move high into the atmosphere, and settles from south 10 degrees latitude, to 45 degrees north. A wide belt of hazy clouds can form, from about 25 to 40 km high. Late in the summer these clouds fade, except over the Tharsis Bulge. ACB cover vast areas and are visible with Earth telescopes.

--- Ground fogs are found in low laying regions such as the Hellas Basin, Noctis Labyrinthus, and Valles Marineris. They tend to form in the morning as frost and water rich ground warms, with the humidity at 100% over a wide area. They quickly disperse with wind and as the air warms.

--- Lee waves are clouds trailing behind large volcanoes. The Tharsis bulge sticks up so high into the atmosphere, that air loses heat as it rises up on to the bulge and gains potential energy (and thus heat) as it flows off the bulge. This has a strong effect on Martian circulation. It can lead to planet wide standing waves, ACB clouds over Tharsis (when they can no longer form elsewhere), and cloud formations before and after tall volcanos.

--- Polar hoods are clouds that cover the Martian poles. NPH is the north polar hood, where as SPH is the south polar hood.

A key difference between Earth and Martian clouds, is that Earth clouds have so much water mass, that the heat released by condensation of water vapour to water droplets, warms the air. This causes up drafts, and effects the circulation of the atmosphere. The amount of water in the Martian air is normally so low, that it has negligible effect on air movements.

The formation of clouds is largely independent of dust storms – both may occur at the same time.

The Planetary Boundary Layer (PBL) is the layer of the atmosphere which is strongly effected by the planet's surface. On Earth, it is 600 meters to 1 km high, usually. (Over deserts, it can occasionally reach 5 km on Earth.) On Mars, the thinner, 'puffier', atmosphere means that the PBL has greater height, normally between 5 and 10 km and occasionally going higher.

The greatest difference between the two, is on Mars, the thinner air results in very little heat being held by the atmosphere near the ground. In the morning, the air warms as the ground warms, and later cools as the ground cools at night. On Mars, temperature inversions are common at night, and low to the ground. (The air is cold touching the cold ground, warms as you go higher, and then starts to cool as you rise higher still.) On Earth, this is rarer, and happens higher up. While the Martian air has little effect on the ground below it, the opposite is not true. The ground modifies the thin air above it with moisture, dust, heat, momentum, and chemicals.

Mixing with the upper atmosphere is fast during the day, and slow at night. This is also true on Earth, but there is less difference between the day and night time rates. Generally, mixing of the lower air with the highest layers of the atmosphere happens more quickly on Mars than on Earth.

Dust devils are an important part of the PBL and normally rise to 60% of the boundary layer's current height. They are responsible for moving most of the dust into the lower atmosphere (tho they are not responsible for the continent sized massive Dust Storms). See the Dust devils entry for more information.