The Argyre quadrangle holds the Argyre basin, a giant impact that occurred 70 million years after the Hellas impact and may have contained a lake in the early history of Mars.

One of the biggest impact basins on Mars is in the Argyre quadrangle. The Argyre quadrangle covers the area from 30° to 65° south latitude and 0° to 60° west longitude (300 -360 E). It contains Galle Crater, which resembles a smiley face. It contains a region on Mars called Argyre Planitia and part of another called Noachis Terra. Noachis is named after Noah in the Bible. This region contains several features that are evidence for ice in the ground. Also, several types of landscapes are very beautiful. These are all discussed and displayed below. Check out the many views from the famous smiley face below.

The word Argyre is named after a legendary silver deposit at the mouth of the Ganges--Arakan, Berma.[1]

The real big feature of the Argyre quadrangle is the Argyre basin, called Argyre Planitia in the geological language of Mars. It was formed by a giant impact that occurred 70 million years after the Hellas impact, the other giant impact in the Southern hemisphere. [2] It contained a lake early in the history of Mars.[3] At least three river valleys (Surius Vallis, Dzigal Vallis, and Palacopus Vallis) drain into it from the south. As soon as water entered the basin, it began to freeze. After it froze solid, the ice formed eskers which are still visible today.[4] [5] Eskers are formed from streams moving under glaciers. Many researchers argue that the impact that formed the Argyre basin probably stuck an ice cap or a thick permafrost layer. That great impact melted the ice and formed a giant lake that eventually sent water to the North. The lake's volume was equal to the Mediterranean Sea. The deepest part of the lake may have taken more than a hundred thousand years to freeze, but with the help of heat from the impact, geothermal heating, and dissolved salts, it may have had liquid water for many millions of years. Life may have developed in this time. This region shows a great deal of evidence of glacial activity with flow features, crevasse-like fractures, drumlines, eskers, tarns, aretes, cirques, Glacial horns, U-shaped valleys, and terraces.

Error creating thumbnail:
Topography of the Argyre basin, the major feature in the Argyre quadrangle.

Here are many views of the famous happy face on Mars. Some parts are greatly enlarged with HiRISE images. 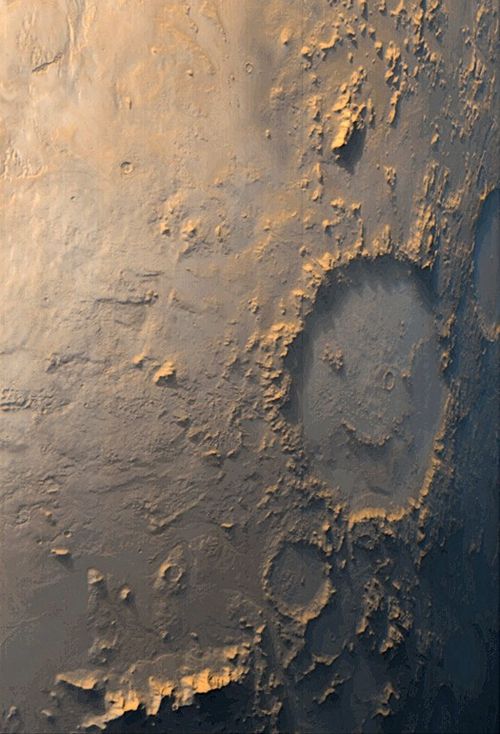 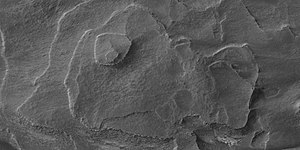 Layered mesa in mound in Galle Crater, as seen by HiRISE under HiWish program 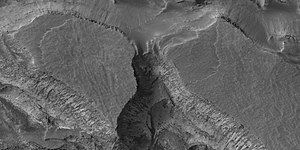 Close view of layers in mound in Galle Crater 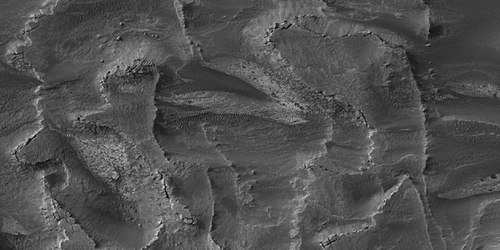 Layers breaking up into boulders in Galle Crater

Wide view of gullies in Arkhangelsky Crater, as seen by HiRISE under HiWish program

Gullies are common in some latitude bands on Mars—usually in midlatitudes. Most Martian gullies are found on the walls of craters or troughs, but Charitum Montes, a group of mountains, has gullies in some locations.

Gullies occur on steep slopes, especially on the walls of craters. Gullies are believed to be relatively young because they have few, if any craters. Moreover, they sometimes are on top of sand dunes which themselves are considered to be quite young. Usually, each gully has an alcove, channel, and apron. For many years, researchers thought the gullies were made by running water. But after many more observations it was found that gullies are being formed today which cannot happen with liquid water. [6] [7] The weather conditions on present day Mars are such that sufficient liquid water cannot exist to cause gullies to form. Experiments on the Earth showed that gullies can be made with the movement of chunks of dry ice moving down steep slope. [8] Changes in gullies were seen on Mars when the temperature was just right for such movements of dry ice. [9] [10] So, today the scientific community mostly supports the idea that the gullies that are forming today are doing so with dry ice moving down steep slopes. [11] [12] [13] However, some concede that liquid water may have been involved in the past. [14]

Gullies on two sides of a mound 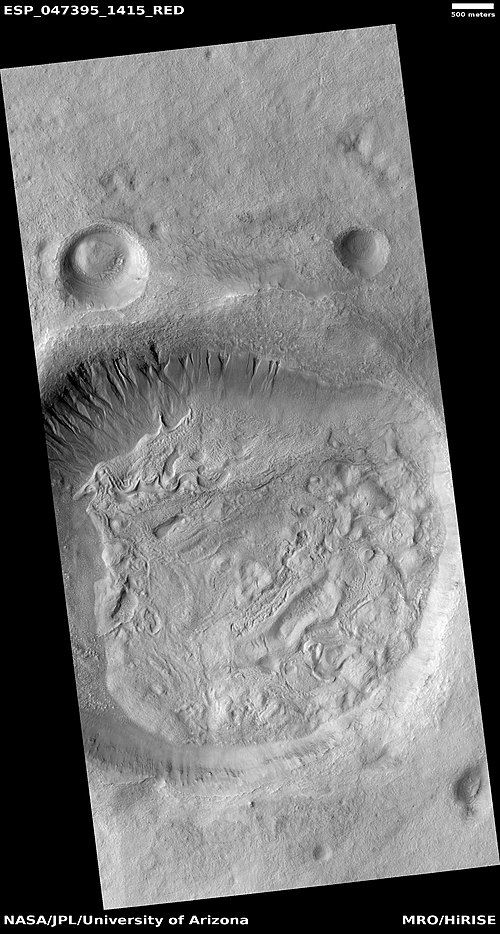 Layers exposed in Nereidum Montes, as seen by HiRISE under HiWish program The light-toned layers may contain sulfates which are good for preserving traces of ancient life.

Some locations in the Argye quadrangle show layers. Many places on Mars show such layers.[15] [16] Finding layered rocks is significant because layered materials usually need water to form. On the Earth most layers have formed under lakes, seas, and oceans. Martian climate changes probably helped greatly in the formation of these layers. These climate variations are due to the tilt of the planet’s rotational axis. Because of these variations of climate, at times the atmosphere of Mars would have been much thicker and contained more moisture. The amount of atmospheric dust also has increased and decreased. It is believed that these frequent changes helped to deposit material in craters and other low places. The rising of mineral-rich ground water cemented these materials. The hardened layers are consequently more protected from erosion. This process may occur instead of layers forming under lakes. 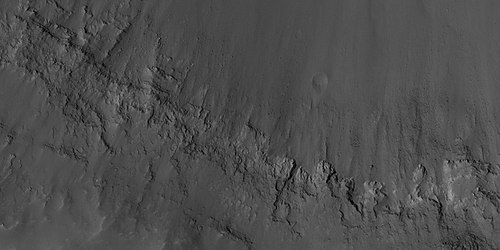 Channels, as seen by HiRISE under HiWish program

This region, as with many other regions on Mars, shows evidence of water in the past. Well-formed channels are present. There is enormous evidence that water once flowed in river valleys on Mars.[17] [18] Images of curved channels have been seen in images from Mars spacecraft dating back to the early seventies with the Mariner 9 orbiter.[19][20] [21] [22] The volume of water needed to carve all the channels on Mars was even larger than the proposed ocean that the planet may have had. Water probably left the ocean and fell as rainfall on other places on the planet.[23] [24] The climate of Mars may have been such in the past that water may have ran on its surface. It has been known for some time that Mars undergoes many large changes in its tilt or obliquity because its two small moons lack the gravity to stabilize it, as our moon stabilizes Earth; at times the tilt of Mars has even been greater than 80 degrees[25] [26]

Dust devil tracks and layers, as seen by HiRISE under HiWish program

Dust devil tracks can be very pretty. They are caused by giant dust devils removing bright colored dust from the Martian surface; thereby exposing a dark layer. Dust devils on Mars have been photographed both from the ground and high overhead from orbit. They have even blown dust off the solar panels of two Rovers on Mars, thereby greatly extending their useful lifetime.[27] The pattern of the tracks has been shown to change every few months.[28] A study that combined data from the High Resolution Stereo Camera (HRSC) and the Mars Orbiter Camera (MOC) found that some large dust devils on Mars have a diameter of 700 m and last at least 26 minutes.[29]

Other features in Argyre quadrangle

Hollows, as seen by HiRISE under HiWish program

Possible pingos Pingos contain a core of ice. They are expected to have cracks on their surfaces because water expands when it turns into ice.

Close view of polygons with ice in troughs between polygons