The Eridania quadrangle once had a large lake. The region includes a wide variety of features that are widespread on Mars, but extremely rare on the Earth. Eridania has gullies, dust devil tracks, glaciers, craters, and gorgeous dunes. The region mainly includes heavily cratered highlands. Kepler Crater is the largest crater. Kepler Crater is named after Johannes Kepler who developed Kepler's laws of planetary motion.

Martian gullies are small, incised networks of narrow channels and their associated downslope deposits. They are named for their resemblance to terrestrial gullies. First discovered on images from Mars Global Surveyor, they occur on steep slopes, especially on the walls of craters. Usually, each gully has an alcove at its head, a fan-shaped apron at its base, and a single thread of incised channel linking the two, giving the whole gully an hourglass shape.[3] They are believed to be relatively young because they have few, if any craters. On the basis of their form, aspects, positions, and location amongst and apparent interaction with supposedly ice-rich features, many researchers believed that the processes carving the gullies involve liquid water. However, with more observations and research this idea has changed. As soon as gullies were discovered, researchers began to image many gullies over and over, looking for possible changes. By 2006, some changes were found.[4] Later, with further analysis it was determined that the changes could have occurred with dry granular flows rather than being driven by flowing water.[5] [6] [7] With continued observations many more changes were found in Gasa Crater and others craters.[8] With more repeated observations, more and more changes were found; since the changes occur in the winter and spring, experts are tending to believe that gullies were formed from dry ice. Before-and-after images demonstrated the timing of this activity coincided with seasonal carbon-dioxide frost changes, and at temperatures that would not have allowed for liquid water. The conditions during gully formation are just about right to allow chunks of dry ice to slide down slopes. To aid the process is the fact that when dry ice frost changes to a gas, it may lubricate dry material to flow especially on steep slopes.[9] [10][11] In some years frost build up may be-as thick as 1 meter. 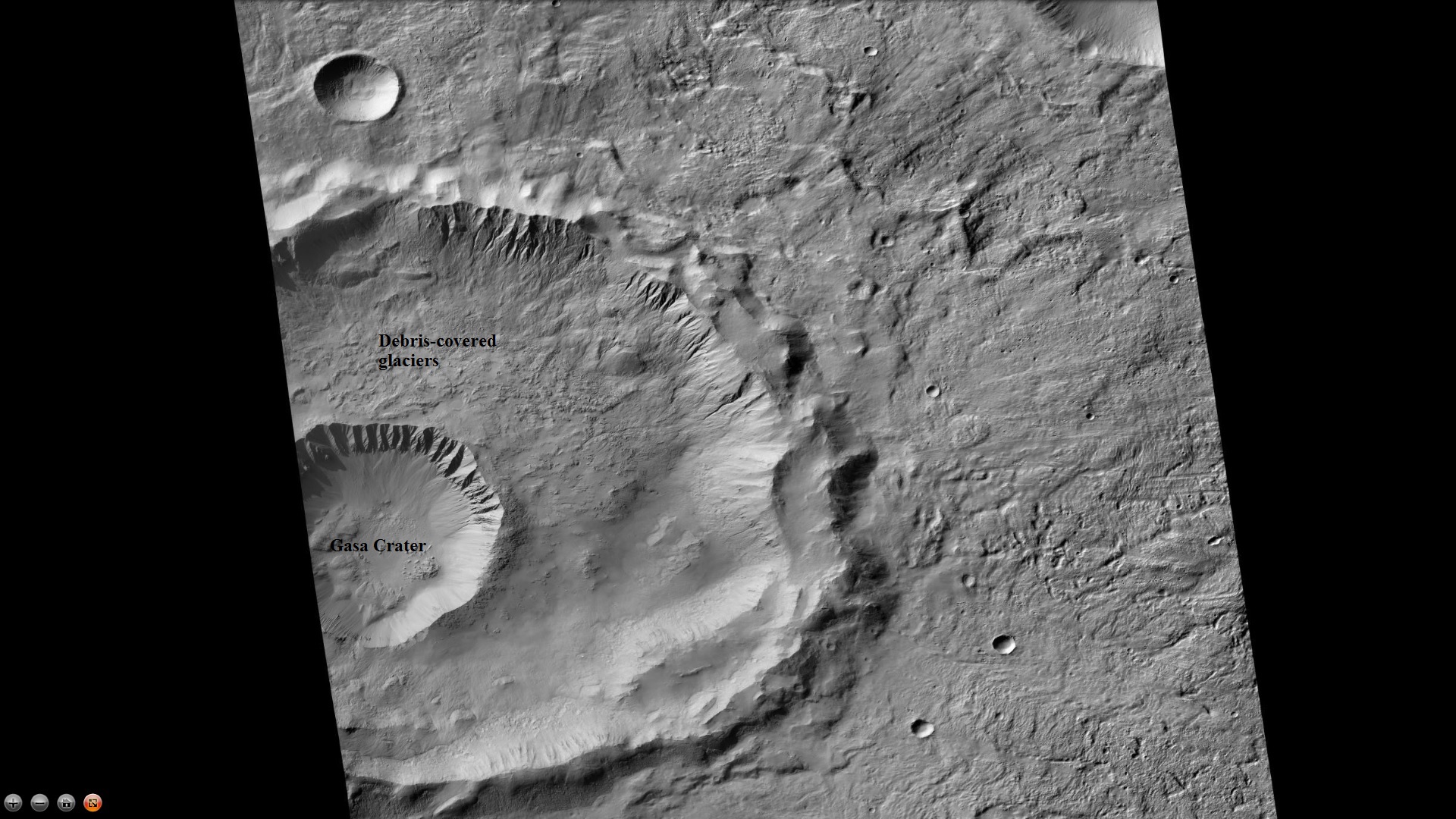 Gasa Crater, as seen by CTX Note: Gasa Crater is the smaller crater. It is believed the impact that created Gasa occurred in a debris-covered glacier.

Many areas on Mars, including Eridania, experience the passage of giant dust devils. A thin coating of fine bright dust covers most of the Martian surface. When a dust devil goes by it blows away the coating and exposes the underlying dark surface. Dust devils occur when the sun warms up the air near a flat, dry surface. The warm air then rises quickly through the cooler air and begins spinning while moving ahead. This spinning, moving cell may pick up dust and sand then leave behind a clean surface.[12] Dust devils have been seen from the ground and high overhead from orbit. They have even blown the dust off of the solar panels of the two Mars Exploration Rovers on Mars, thereby greatly extending their lives.[13] The twin Rovers were designed to last for 3 months, instead they lasted many years; Opportunity Rover explored Mars for over 14 years. The pattern of the tracks have been shown to change every few months.[14]

A study that combined data from the High Resolution Stereo Camera (HRSC) and the Mars Orbiter Camera (MOC) found that some large dust devils on Mars have a diameter of 700 meters and last at least 26 minutes.[15]

The Mars Global Surveyor (MGS) discovered magnetic stripes in the crust of Mars, especially in the Phaethontis and Eridania quadrangles (Terra Cimmeria and Terra Sirenum).[16] [17]

When molten rock containing magnetic material, such as hematite (Fe2O3), cools and solidifies in the presence of a magnetic field, it becomes magnetized and takes on the polarity of the background field. This magnetism is lost only if the rock is subsequently heated above a particular temperature (the Curie point which is 770  °C for iron). The magnetism left in rocks is a record of the magnetic field when the rock solidified.[18]

The magnetometer on MGS discovered 100 km wide stripes of magnetized crust running roughly parallel for up to 2000 km. These stripes alternate in polarity with the north magnetic pole of one pointing up from the surface and the north magnetic pole of the next pointing down.[19] When similar stripes were discovered on Earth in the 1960s, they were taken as evidence of plate tectonics. Researchers believe these magnetic stripes on Mars are evidence for a short, early period of plate tectonic activity.[20] When rocks became solid they retained the magnetism that existed at the time. A magnetic field of a planet is believed to be caused by fluid motions under the surface.[21] [22] [23] However, there are some differences, between the magnetic stripes on Earth and those on Mars. The Martian stripes are wider, much more strongly magnetized, and do not appear to spread out from a middle crustal spreading zone. Because the area containing the magnetic stripes is about 4 billion years old, it is believed that the global magnetic field probably lasted for only the first few hundred million years of Mars' life, when the temperature of the molten iron in the planet's core might have been high enough to mix it into a magnetic dynamo. There are no magnetic fields near large impact basins like Hellas. The shock of the impact may have erased the remnant magnetization in the rock. After the Hellas impact no magnetic fields existed. This fact tells us that there was only early magnetism.[24]

Some researchers have proposed that early in its history Mars exhibited a form of plate tectonics. At about 3.93 billion years ago Mars became a one plate planet with a superplume under Tharsis.[25] [26] [27]

Dunes, including barchans are present in the Eridania quadrangle and in some pictures below. When there are perfect conditions for producing sand dunes, steady wind in one direction and just enough sand, barchan sand dunes form. Barchans have a gentle slope on the wind side and a much steeper slope on the lee side where horns or a notch often forms.[28] The whole dune may appear to move with the wind. Observing dunes on Mars can tell us how strong the winds are, as well as their direction. If pictures are taken at regular intervals, one may see changes in the dunes or possibly in ripples on the dune’s surface. On Mars dunes are often dark in color because they were formed from the common, volcanic rock basalt. In a dry environment, dark minerals in basalt, like olivine and pyroxene, do not break down as they do on Earth. Although rare, some dark sand is found on Hawaii which also has many volcanoes discharging basalt. Barchan is a Russian term because this type of dune was first seen in the desert regions of Turkistan.[29] Some of the wind on Mars is created when the dry ice at the poles is heated in the spring. At that time, the solid carbon dioxide (dry ice) sublimates or changes directly to a gas and rushes away at high speeds. Each Martian year 30% of the carbon dioxide in the atmosphere freezes out and covers the pole that is experiencing winter, so there is a great potential for strong winds.[30]

Dark dunes, as seen by HiRISE under HiWish program. Dark dunes are composed of the igneous rock basalt. The dark box in the center of the photo shows the area enlarged in the next image. The scale is 500 meters long.

Glaciers, loosely defined as patches of currently or recently flowing ice, are thought to be present across large but restricted areas of the modern Martian surface, and are inferred to have been more widely distributed at times in the past.[31] [32] Some glaciers on Mars have lost most of their ice, but they can be identified by the shape of the piles debris they left behind (called moraine).

The Eridania Basin, located near 180 E and 30 South, is thought to have contained a large lake with a depth of 1 km in places.[33] [34] The basin is composed of a group of eroded and connected topographically impact basins. The lake has been estimated to have an area of 3,000,000 square kilometers. Water from this lake entered the channel called Ma'adim Vallis which starts at the lake's north boundary.[35] It is surrounded by valley networks that all end at the same elevation, suggesting that they emptied into a lake.[36] Magnessium-rich clay minerals and opaline silica have been detected in the area.[37] These minerals are consistent with the presence of a large lake.[38]

Later studies found many other minerals that support the contention that a lake existed here. The minerals detected must have water to be formed. The spectrometer CRISM, onboard the Mars Reconnaissance Orbiter, found thick deposits, greater than 400 meters thick, that contained the minerals saponite, talc-saponite, Fe-rich mica (for example, glauconite-nontronite), Fe- and Mg-serpentine, Mg-Fe-Ca-carbonate and probable Fe-sulphide. The Fe-sulphide probably formed in deep water from water heated by volcanoes. Analyses from the Mars Reconnaissance Orbiter provided evidence of ancient hydrothermal seafloor deposits in Eridania basin, suggesting that hydrothermal vents pumped mineral-laden water directly into this ancient Martian lake.[39] [40] 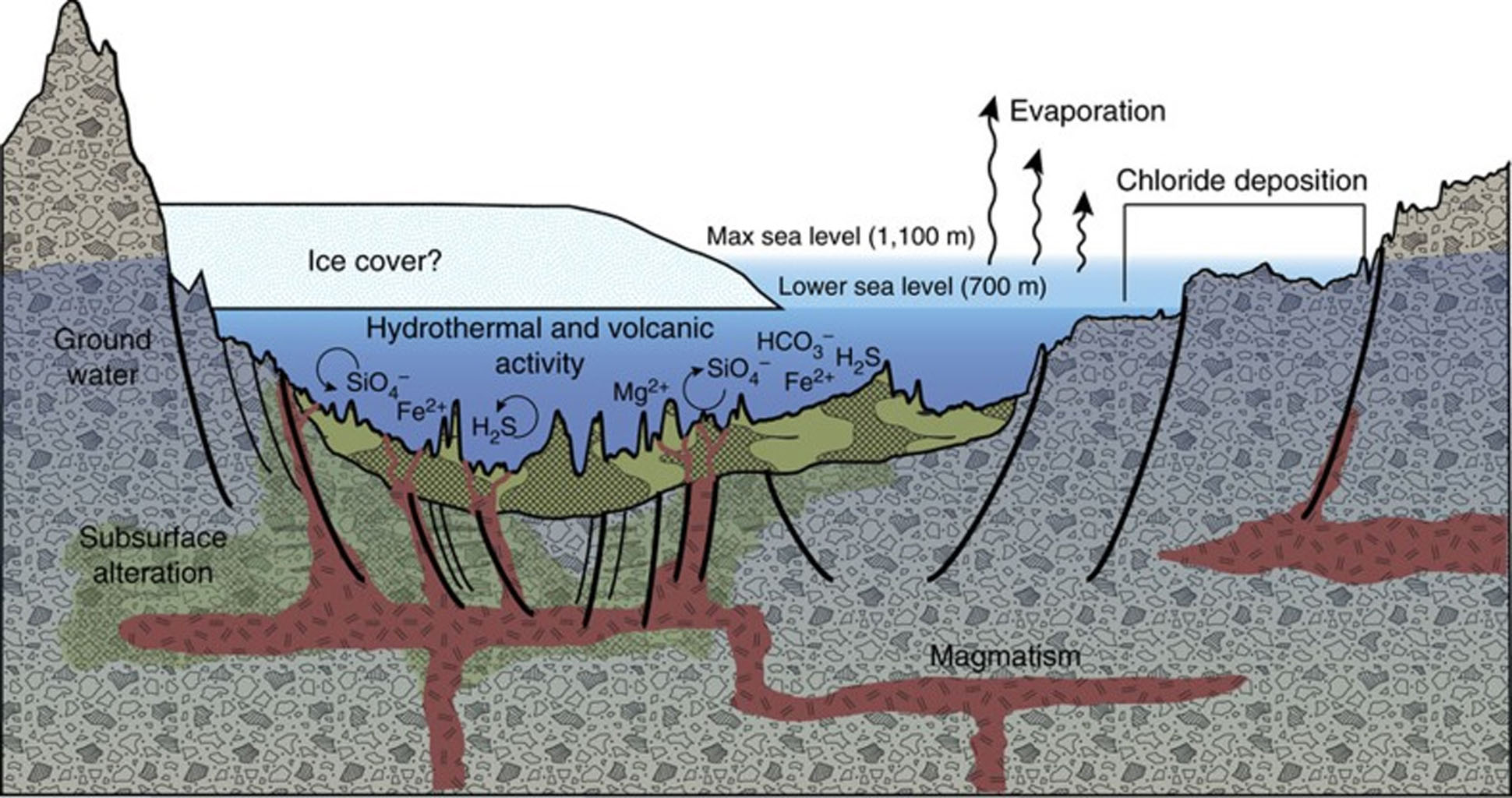 Diagram showing how volcanic activity may have caused deposition of minerals on floor of Eridania Sea. Chlorides were deposited along the shoreline by evaporation.

Much of the Martian surface is covered with a thick ice-rich, mantle layer that has fallen from the sky a number of times in the past.[41] [42][43] In some places a number of layers are visible in the mantle.[44] Some surfaces in Eridania are covered with this ice-rich mantling unit. In some places the surface displays a pitted or dissected texture; these textures are suggestive of material that once held ice that has since disappeared allowing the remaining soil to collapse into the subsurface.[45] 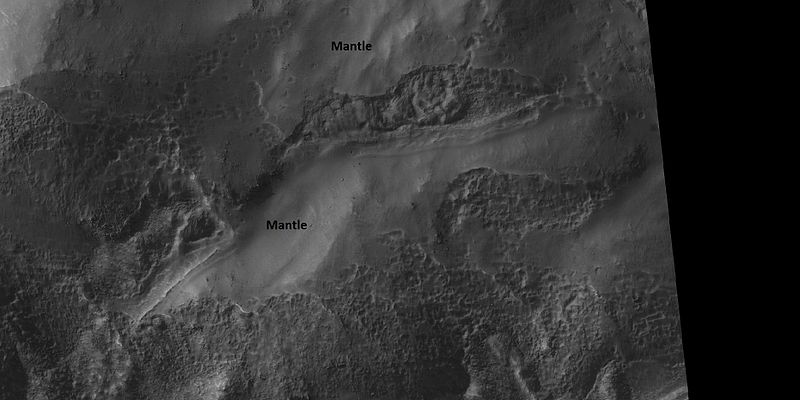 There exists a great deal of evidence that water once flowed in river valleys and channels on Mars. Images of curved channels have been seen in images from Mars spacecraft dating back to the early seventies with the Mariner 9 orbiter.[46] [47] [48] [49] Vallis (plural valles) is the Latin word for 'valley. It is used in planetary geology for the naming of features on other planets, including what could be old river valleys that were discovered on Mars, when probes were first sent to Mars. The Viking Orbiters caused a revolution in our ideas about water on Mars; river valleys were found in many areas. Space craft cameras showed that floods of water broke through dams, carved deep valleys, eroded grooves into bedrock, and traveled thousands of kilometers.[50] [51] [52]

Other features in Eridania quadrangle