The Memnonia quadrangle is one of a series of 30 quadrangle maps of Mars used by the United States Geological Survey (USGS) and is also referred to as MC-16 (Mars Chart-16).[1] This quadrangle covers latitude 30°S to 0° and longitude 135° to 180° W (225-180 E).[2] The name comes from a classic name that refers to the Land of Memnon, King of Ethiopia. It was approved in 1958 by IAU. Memnonia includes parts of the following classical regions of Mars: Arcadia Planitia, Amazonis Planitia, Lucus Planum, Terra Sirenum, Daedalia Planum, and Terra Cimmeria. Part of the Medusae Fossae Formation is found in the Memnonia quadrangle. The western part of Memnonia is a highly cratered highland region that exhibits a large range of crater degradation.

Vallis (plural valles) is the Latin word for valley. It is used in planetary geology for the naming of features on other planets that resemble river valleys. The Memnonia quadrangle contains many curved valleys that are probably old river valleys. There is enormous evidence that water once flowed in river valleys on Mars. Images of curved channels have been seen in images from Mars spacecraft dating back to the early seventies with the Mariner 9 Orbiter.[3] [4] [5] [6] The Viking Orbiters caused a revolution in our ideas about water on Mars; they found huge river valleys in many areas. Space craft cameras showed that floods of water broke through dams, carved deep valleys, eroded grooves into bedrock, and traveled thousands of kilometers.[7] [8] [9] Some valles on Mars (Mangala Vallis, Athabasca Vallis, Granicus Vallis, and Tinjar Valles) clearly begin at grabens. Grabens are long, mostly straight troughs. They are caused by a stretching of the crust—on Mars this is a result of the weight of huge volcanoes. On the other hand, some of the large outflow channels begin in rubble-filled low areas called chaos or chaotic terrain. It has been suggested that some chaotic terrain was formed when massive amounts of water were suddenly released after being trapped under a thick cryosphere (layer of frozen ground)--perhaps when the cryosphere was broken by a fault.[10] [11]

Besides river like forms, other evidence of past water in the region has been discovered in this region. Layered sedimentary rocks were found in the wall and floor of Columbus Crater. These rocks could have been deposited by water or by wind. But, there is evidence that it was water since hydrated minerals were found in some of the layers, and those types of minerals are formed in water environments.[12]

Mangala Vallis is a major channel system that contains several basins which filled with water, and then the overflow went through a series of spillways.[13][14] One source of waters for the system was Memonia Fossae, but water also probably came from a large basin centered at 40 degrees S.[15][16] [17]

Many places on Mars show rocks arranged in layers. Layers are also called strata. Rock can form layers in a variety of ways. Volcanoes, wind, or water can produce layers.[18] Sometimes the layers are of different colors. Light-toned rocks on Mars have been associated with hydrated minerals like sulfates. The Mars Rover Opportunity examined such layers close-up with several instruments. Instruments on orbiting spacecraft have detected clay (also called phyllosilicate) in some layers. Recent research with an orbiting near-infrared spectrometer (which reveals the types of minerals present based on the wavelengths of light they absorb) found evidence of layers of both clay and sulfates in Columbus crater.[19] This is exactly what would appear if a large lake had slowly evaporated.[20] Moreover, because some layers contained gypsum, a sulfate which forms in relatively fresh water, life could have formed in the crater.[21] Scientists are excited about finding hydrated minerals such as sulfates and clays on Mars because they are usually formed in the presence of water.[22] Places that contain clays and/or other hydrated minerals would be good places to look for evidence of life.[23]

Layers exposed at the base of a group of buttes in Mangala Valles in Memnonia quadrangle Arrows point to boulders sitting in pits. The pits may have formed by winds, heat from the boulders melting ground ice, or some other process.

Impact craters generally have a rim with ejecta around them, in contrast volcanic craters usually do not have a rim or ejecta deposits. As craters get larger (greater than 10 km in diameter) they usually have a central peak.[24] The peak is caused by a rebound of the crater floor following the impact.[25] Sometimes craters will display layers; those layers show us what kinds of rocks were present in the past. Since the collision that produces a crater is like a powerful explosion, rocks from deep underground are tossed unto the surface. Hence, rocks around the crater are samples of what lies deep under the surface. At times, bright rays surround craters because the impact has gone down to a bright layer of rocks, and then placed bright rocks on the darker surface. An image above from Mars Global Surveyor shows this.

Ridges on Mars may be due to different causes. Long straight ridges are thought to be dikes (from magma movements). Curved and branched ridges may be examples of inverted topography, and groups of straight ridges that cross each other may be the result of impacts. These intersecting box-like ridges are called linear ridge networks. Linear ridge networks are found in various places on Mars in and around craters.[26] Ridges often appear as mostly straight segments that intersect in a lattice-like manner. They are hundreds of meters long, tens of meters high, and several meters wide. Even though the exact origin is not known at present, one popular idea is that impacts created fractures in the surface, these fractures later acted as channels for fluids. Fluids carried minerals which hardened into the ridges we see today. With the passage of time, surrounding material was eroded away, thereby leaving hard ridges behind.

Yardangs are common in some regions on Mars, especially in what's called the "Medusae Fossae Formation."[27] They are formed by the action of wind on sand sized particles; hence they often point in the direction that the winds were blowing when they were formed.

Many places on Mars show dark slope streaks on steep slopes, like crater walls. The youngest streaks are the darkest[28] Often they begin as a small narrow spot then widen and extend downhill for hundreds of meters. It is most generally accepted that the streaks represent avalanches of dust.[29] When a thin layer of dust is removed, the dark underlying surface becomes visible. Much of the Martian surface is covered with dust with much of it resulting from dust storms. Dust storms are frequent, especially when the spring season begins in the southern hemisphere. At that time, Mars is 40% closer to the sun. The orbit of Mars is much more elliptical then the Earth's. That is the difference between the farthest point from the sun and the closest point to the sun is very great for Mars, but very little for the Earth. Also, every few years, the entire planet is engulfed in a global dust storm. When NASA's Mariner 9 craft arrived there, nothing could be seen through the dust storm.[30] Other global dust storms have also been observed, since that time. Dark streaks can be seen in the image below taken with HiRISE of the central mound in Nicholson Crater. At least one streak in the image splits into two when encountering an obstacle.

Research, published in January 2012 in Icarus, found that dark streaks were initiated by airblasts from meteorites traveling at supersonic speeds. After counting some 65,000 dark streaks around the impact site of a group of 5 new craters, the team of scientists discovered patterns in the data. The number of streaks was greatest closer to the impact site. So, the impact somehow probably caused the streaks. Also, the distribution of the streaks formed a pattern with two wings extending from the impact site. The curved wings resembled curved knives, called scimitars. This pattern suggests that an interaction of airblasts from the group of meteorites shook dust loose enough to start dust avalanches that formed the many dark streaks. At first it was thought that the shaking of the ground from the impact caused the dust avalanches, but if that was the case the dark streaks would have been arranged symmetrically around the impacts, rather than being concentrated into curved shapes.[31] [32]

Large troughs (long narrow depressions) are called fossae in the geographical language used for Mars. This term is derived from Latin; therefore fossa is singular and fossae is plural.[33] Troughs form when the crust is stretched until it breaks. The stretching can be due to the great weight of a nearby volcano. A trough often has two breaks with a middle section lower, leaving steep cliffs along the sides; such a trough is called a graben.[34] Lake George, in northern New York State, is a lake that occupies a graben. Other ideas have been suggested for the formation of fossae. There is evidence that they are associated with dikes of magma. Magma might move along, under the surface, breaking the rock and more importantly melting ice. The resulting action would cause a crack to form at the surface. Dikes caused both by tectonic stretching (extension) and by dikes are found in Iceland.[35] An example of a graben caused by a dike is shown below in the image Memnonia Fossae, as seen by HiRISE.

It appears that the water started coming out of the surface to form Mangala Vallis when a graben formed.[36]

Lava is common on Mars, as it is on many other planetary bodies.

Fifty Years of Mars Imaging: from Mariner 4 to HiRISE

On October 3, 2017, HiRISE acquired a picture of Mars in the Memnonia quadrangle of a spot that has been imaged by 7 different cameras on different spacecraft over the past 50 years.[37] The pictures from the Red Planet started with one of the pictures from Mariner 4 in the summer of 1965. The following pictures show these pictures with their increasing resolution over the years. The resolution in the first image by Mariner 4 was 1.25 Km/pixel; that compares to the approximate 50 cm/pixel resolution of HiRISE.

Area in black rectangle is covered in the photos below. Blue arrow indicates the spot eventually imaged by HiRISE. The relative positions of Columbus Crater, Williams Crater, Ejriksson Crater, Dejnev Crater, and Bernard Crater are shown. 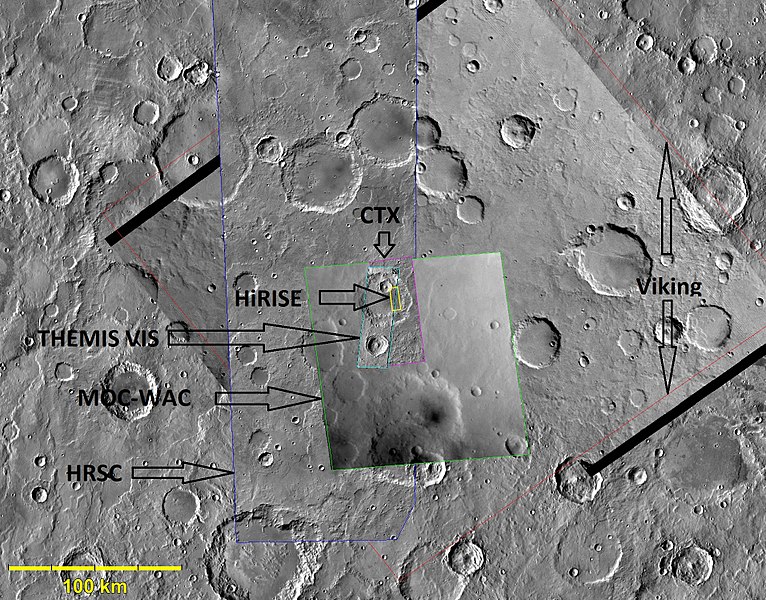