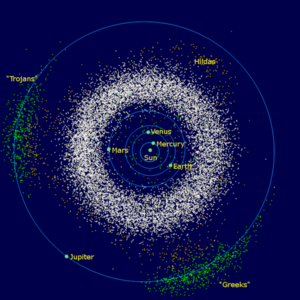 ) of Jupiter and are known as the Greeks and the Trojans respectively. Jupiter's Lagrangian point asteroids are generally known as Trojan asteroids, and this term is often used to describe Mars' Lagrangian objects. The Hildas are another swarm of asteroids on the far-side of the Sun (opposing Jupiter). The Hildas are in orbital resonance with the large gas giant and can be found near Jupiter's