several black spots near Arsia Mons, suspected to be caves 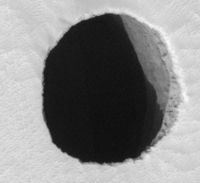 Natural Caves have been found near the volcano Arsia Mons on Mars. They are part of larger features called Lava Tubes.

The caves are a possible location to establish a human settlement. They could be re-constructed to become large habitats. The caves would provide shelter and plenty of space for housing. They could, perhaps, also be a source for water and rare minerals.

Nadine Barlow said: "Caves on Mars could be good places for long-term ice accumulation and that would make them ideal locations to look for life on Mars as well as valuable reservoirs for water to support future human exploration of the planet."

The caves could be used directly as habitats or serve as locations for pressurized habitats. It may not be possible to pressurize the caves directly, due to cracks and flaws in the rock, of lack of mass in the covering rock. In such a case the caves could serve as radiation shelters and the habitats built inside could have relatively light walls that only need to hold in atmospheric pressure.

The stability of the caves seems high, as they are probably hundreds of millions of years old. However, features such as riles, presumed to be collapsed lava tubes, show that the caves can disappear over time.

Caves and Lava Tubes might be quite cold inside, and as they are not heated by sunlight they might contain easily accessible volatiles.

The actual geometry of the Martian caves is unknown. It is uncertain whether they are usable or not. An exploration is necessary to find it out before the start of detailed planning. Caves and lava tubes might not have been subject to weathering. In such a case the rocks inside might be quite sharp, and precautions would be needed for exploration and settlement. Holes in the roof of lava tubes can serve as natural access points and have been identified on Mars.