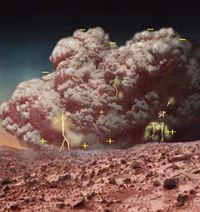 An artist's impression of electrical discharge in a Mars dust storm.

It is unknown whether Mars experiences lightning in it's atmosphere.

Terrestrial lightning may be generated by a number of factors, but the result is the same, bright electric discharge. Due to Earth's complex and ubiquitous weather dynamics, hot and cool air can be forced together along weather fronts, or by volcanic clouds of hot ash for example. This generates negative electrical charge through friction. If the conditions are right (and the "correct" conditions are of much debate)[1], the static electric charge may discharge in the form of a lightning bolt, grounding the static charge with the planet surface, completing the atmospheric "circuit" via a stream of negative current of ~40 kA. The surrounding air is instantly heated to 10,000K, producing a shock wave that can be heard as a crack of thunder.

It is very difficult to explain the possible existence of lightning on Mars. There is little observational evidence (although meteorite imact craters have been highlighted as possible sites of electrical discharge)[2], but localized lightning storms may result from intense dust storms or solar wind interactions. Lightning storms from Mars weather systems seem highly improbable due to the low dynamics and tenuous atmosphere (the capacitance of the atmosphere would therefore be very low). Needless to say, if lightning does occur during intense dust storms, Mars settlers will be at massive risk.

Low humidity environments produce a high risk of static electric discharge. When humidity is high, static electricity is constantly discharged as humid air contains water vapor which is highly conductive. There will be very little risk of sparks or electric shock when a conducting object (i.e. a hand) is in close proximity to another conducting object (i.e. a metal door). However, if humidity is low, the capacitance of conducting objects will greatly increase, allowing the buildup of electrical charge.[3] Sparking may result. Small, static electric shocks can cause injury and extensive damage to electrical circuits, so the humidity of settlement interiors must be carefully managed.

Lightning in Mars' past

It is very hard for lightning to form in the near vacuum of Mars, but in the past, Mars had a much thicker atmosphere (estimated to be around 3 bar). In this ancient atmosphere, lightning would have been much more likely. See also, atmospheric loss.