The Mars Homestead Project™, the main project of the Mars Foundation™, is a project first envisioned by Bruce Mackenzie. It would be the first habitat on Mars built using local materials. Focusing on human settlement before science, this first iteration of the Mars Homestead Project would serve as a permanent home for up to twelve individuals. Using a Paolo Soleri-inspired “linear city” model, the habitat could be expanded around the perimeter of a mesa or other landform. According to the Foundation, “The ultimate goal of the project is to build a growing, permanent settlement beyond the Earth, thus allowing civilization to spread beyond the limits of our small planet."

Choosing a suitable mesa or other eminent landform in advance, the mission would pre-emplace a nuclear power plant, excavators, brick-making ovens, and other essential tools [null on the surface] before the settlers arrive. The site would be selected with a variety of considerations in mind, including accessibility to surface water, sites of scientific interest, ease of access to/from orbit, atmospheric pressure, and site aesthetics. One initial site might be Candor Chasma, part of the Valles Marineris canyon complex.

Living out of a “tuna can” habitat/lander as the construction shack, settlers would excavate building materials from the side of the mesa or hillside and mold bricks using the excavated regolith fortified with fibers from the parachutes used to bring materials down to the surface. Then they would build barrel vaults and other Romanesque-style structures with masonry techniques adapted to Mars conditions.

The vaults would enclose pressure vessels initially brought from Earth. To sustain external pressure on the pressure vessels, the vaults would be reburied with the leftover excavated materials. This approach also helps the Hillside Settlement blend into and become part of the landscape. Parts of the structure would remain open to the sky to provide windows, airlocks, surface vehicle garages, and access to greenhouses, which would rely in part on natural sunlight. The interior spaces also could include skylights for allowing in sunlight. A single large tree would be used as a centerpiece of the living area.

The internal architecture of the habitat would comprise two floors and would include a kitchen, dining hall, bedrooms, medical facilities, workshop, laboratory, and exercise rooms, as well as spaces for supporting individual, couple, small group, and community activities. In keeping with the linear city model, the rooms would have a double loop floor plan so that settlers would have multiple traffic flows and more than one exit in the event that pressure is compromised in one or more rooms. Plants would be integral to the interior spaces as decoration, food, room dividers, and supplemental sources of oxygen. 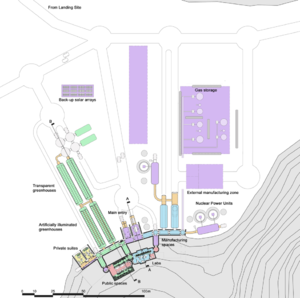 Initially, internal atmospheric pressure would be stabilized at approximately 620 millibars (8.9 pounds per square inch). Crew rations would include two to three years of supplies from Earth, which would eventually be supplemented or replaced by food grown in the settlement.