Viking 2 was one of the two spacecraft of the Viking program that studied Mars both from orbit and from the surface. [1] Each of the Viking craft had two main parts. The orbiters photographed nearly the entire surface of Mars, while the lander performed many experiments on the ground. The orbiters also relayed data from the landers to the Earth after they touched down.[2] 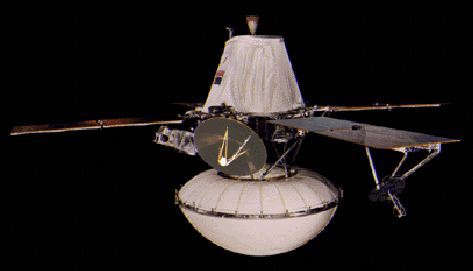 Viking 2, was launched on September 9, 1975, using a Titan III rocket with Centaur (rocket stage) upper stages. It entered orbit on August 7, 1975. After studying Mars from orbit for over a month, scientists sent the lander to the surface. Its exact landing site was about 200 km west of Mie Crater in Utopia Planitia in the Cebrenia quadrangle at 47.64 degrees N and 134.29 degrees E (225.71 W).[3] The location can easily be seen on maps of Mars because Mie Crater sits by itself in the north. For over four years it imaged the surface, analyzed soil samples, and performed experiments that looked for life. The last message from Viking Lander 2 came to Earth on April 11,1980.[4] The last communication with the Viking 2 Orbiter occurred on July 25, 1978.[5] By the end of the Orbiter’s mission, it had returned nearly 16,000 images in its 706 orbits around the Red Planet.[6]

View of surface around Viking 2

The fully fueled combined orbiter/lander had a mass of 3530 kg, but after separation and landing the orbiter had a mass of 900 kg and the lander a mass of about 600 kg. Power for the orbiter was supplied with solar panels, while two radioisotope thermal generators (RTG) gave power to the lander. The two RTG’s used plutonium 238. A high-gain, parabolic antenna and a low-gain omnidirectional were used for communication on the lander. The lander’s scientific instruments had a total mass of about 91 Kg.[7] 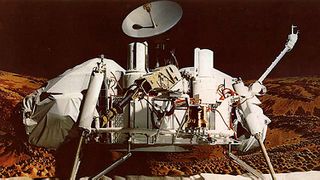 What we learned about soil 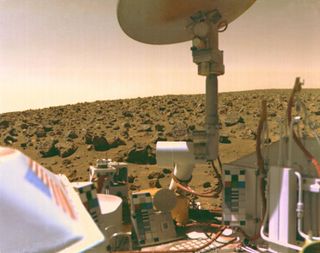 Image from Mars taken by Viking 2

Minerals detected in the soil were similar to those produced from the weathering of basaltic lavas on Earth. Dirt at this site contained abundant silicon and iron, in addition to significant amounts of magnesium, aluminum, sulfur, calcium, and titanium. Strontium and yttrium were found in trace amounts. Potassium was 5 times lower than the average in the Earth's crust. Sulfur and chlorine were similar to compounds that remain after sea water evaporates. Sulfur was more concentrated in the top crust of the soil than in the underlying bulk soil. Sulfur could be in the form of sulfates of sodium, magnesium, calcium, or iron. Iron sulfide is also possible.[10] Elements in the soil were found with an X-ray fluorescence spectrometer.[11] Results from Viking soil sample analysis are consistent with what other landers have discovered. Both Spirit Rover and the Opportunity Rover found sulfates on Mars.[12] The Opportunity Rover (landed in 2004 with advanced instruments) found magnesium sulfate and calcium sulfate at Meridiani Planum.[13] Mineral models suggest that the soil could be a mixture of about 90% iron-rich clay, about 10% magnesium sulfate (kieserite?), about 5% carbonate (calcite), and about 5% iron oxides (hematite, magnetite, goethite?). These minerals are typical weathering products of mafic igneous rocks. The dark, igneous rock basalt is believed to make up much of the surface of Mars, as it does for the Earth.[14] [15] [16]

Scientists have tried repeatedly to determine the nature of the magnetic component in Martian dust. Studies with magnets aboard the Viking landers indicated that the soil is between 3 and 7 percent magnetic materials by weight. The magnetic chemicals could be magnetite and maghemite. These could come from the weathering of basalt rock.[17] [18] The Pathfinder mission carried several magnets of varying strength. Because the weakest magnet did not attract any soil, researchers concluded that the dust did not contain pure magnetite or just one type of maghemite. Rather, they thought Mars dust probably was an aggregate possibly cemented withferric oxide (Fe2O3).[19] Experiments carried out by the Mars Spirit Rover (landed in 2004) indicated that magnetite could explain the magnetic nature of the dust and soil on Mars. Magnetite was found in the soil and that the most magnetic part of the soil was dark. Magnetite is very dark.[20] 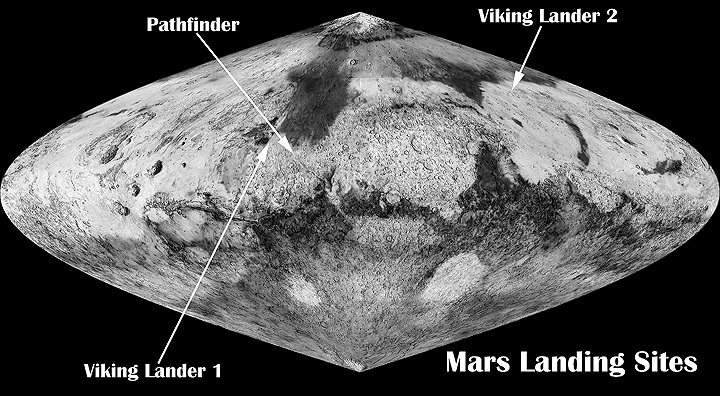 Viking 2 collected various weather data the whole time it was on the surface. Temperatures at this location varied from a low of -189.4 degrees F (-123 C, 150 K) to a high of -9.4 degrees F (-23 C, 250 K). As these temperatures were recorded in the far north, cold temperatures would be expected. Furthermore, pressure changes, seasonal dust storms, and transport of atmospheric gases between the polar caps were observed.[21] Together, the two Viking landers found that Mars undergoes extreme changes in pressure with changes in seasons. In the first month on Mars, Viking measured a 5% drop in air pressure. Much of the atmosphere freezes out onto one of the ice caps during the winter season. Carbon dioxide makes up 95% of the atmosphere. Nitrogen was measured at 2-3 percent, argon was 1-2%, and only 0.1-0.44 was oxygen. Vikings were even able to examine the ratio of isotopes in the gases in the atmosphere. Nitrogen ratios lead scientists to believe that the atmosphere was once 4-5 times as dense as at present. Over the years, the lighter isotopes of Nitrogen escaped the planet.[22] This idea that the atmosphere was once much thicker has received support from later missions to study the atmosphere, especially from the MAVEN mission.[23] [24]

The gas exchange experiment examined gases given off by a soil sample after a liquid mixture of organic and inorganic chemicals were added. Scientists expected that as any organisms consumed the nutrients, they would give off waste gases.[25] The results were not consistent with life. In the labeled release experiment very dilute aqueous nutrient solution that contained radioactive Carbon-14 were added to a sample. If a type of animal ate some of the radioactive food, than it would breath out radioactive carbon dioxide. We like all other animals eat food, use it for energy, and then breathe out carbon dioxide and water. If our food contained radioactive carbon, then the carbon dioxide in our expelled air would also be radioactive. Much to our surprise, this did happen. When another sample was tested by first heating to destroy any microorganisms that might be present, no radioactive gas was given off. Therefore, it seemed that the heating had indeed killed the life in the sample. However, when additional nutrient fluid was put on a sample that had not been heated, the reaction did not give the same results. In the end it, scientists said that the results were inconclusive.[26] [27] A third experiment, the pyrolytic release experiment, searched for organisms that carried out photosynthesis like plants on Earth. In the experiment water, and gases (carbon monoxide and carbon dioxide) made radioactive were added to a soil sample and a light was turned on. After several days, the gases were removed and the sample baked and examined to see if any of the gases were converted into organic compounds. No radioactive compounds were found. Apparently, there were no plant-like organisms changing simple compounds like water and carbon dioxide into organic chemicals.[28] Besides carrying out experiments to look for organisms, Viking also looked for organic chemicals—the chemicals of all living things on Earth. Both Viking landers used gas chromatograph — mass spectrometer to look for organic compounds. Even though this instrument was capable of detecting organic molecules present at a level of a few parts/billion, none were found.

Did we find life?

Three experiments on Viking looked life. Although some activity was observed, most scientists now believe that the data were produces from inorganic chemical reactions of the soil. A few scientists still to this day believe the results were due to living organisms.[29] [30] [31] Because no organic chemicals were found in the soil, most scientists concluded there was no life detected at this location. However, dry areas of Antarctica do not have detectable organic compounds either, but they have organisms living in the rocks.[32] Early on, some suggested that the lack of a protective ozone layer would allow UV light to sterilize the soil surface. Mars has almost no ozone layer, like the Earth, so UV light sterilizes the surface and may produce peroxides that would change any organic chemicals.[33] These theories did seem to be valid as decades later the Phoenix Lander detected the chemical perchlorate in the Martian Soil. Perchlorate, a strong oxidant may have wipe out any traces of organic matter in the Martian soil.[34] Carbon-based life would be difficult at the soil surface, if perchlorates were pervasive on Mars. In addition, a study, published in the Journal of Geophysical Research in 2010, suggested that organic compounds were actually present in the soil analyzed by both Viking 1 and 2. The study's authors found that perchlorate will destroy organics when heated and will produce chloromethane and dichloromethane, the same chlorine compounds discovered by both Viking landers when they performed the tests on Mars.[35] [36] [37] [38]Since perchlorate would have broken down any Martian organics, there could be life at the Viking sites.[39] [40]