Difference between revisions of "Terraforming" 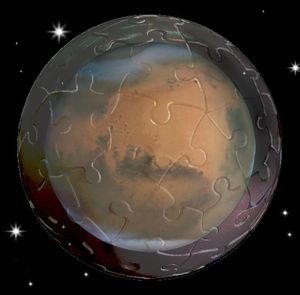 Terraforming, or Earth-shaping, is a theoretical process of modifying a planet's atmosphere to make it habitable for humans. In the case of Mars, terraforming would require first warming the planet, then artificial thickening of the atmosphere so pressure suits are not needed, ice melting to increase the H2O content of the atmosphere (creating water clouds), adding nitrogen as a buffer gas, and greatly increasing the O2 density to ultimately make the atmosphere breathable. 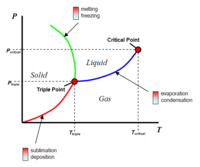 Using giant mirrors to reflect light on to Mars would help warm Mars by increasing its insolation. Statites (stationary satellites held up by light pressure) have been suggested to beam light to the north and south poles of Mars. Others have suggested mirrors in sun synchronous orbits to beam light onto the terminator (which would brighten both dawn and dusk).

Mars could be warmed up using Super Greenhouse Gases such as perfluorocarbons, which are stable in the atmosphere for long periods of time.

Other super greenhouse gasses include sulfur hexafluoride and 1,1,1-Trichloro ethane. These are very stable and highly effective greenhouse gasses. Use of such gasses to warm the atmosphere would allow the Carbon dioxide frozen into the polar caps and some of the water to evaporate adding to the mass of the atmosphere. If 4 hundredths of a microbar of manufactured greenhouse gas is needed to warm Mars to the point of runaway greenhouse effect, then a mass of manufactured greenhouse gasses equal to about 5.73 times the cargo capacity of the Edmund Fitzgerald (26,000 tonnes) every week for twenty years (about 150 million tonnes) would be required for the project. (Other estimates suggest a somewhat higher amount would be required to make up for the break up of these gases by ultraviolet light. See the Super Greenhouse Gas page for more discussion.)

Using nuclear bombs to vaporize the southern carbon dioxide (CO2) ice cap is not now thought to be effective. (The CO2 would simply freeze out again.) NASA researcher, Chris McKay, has pointed out that all the nuclear bombs on Earth only equal the energy of 1/2 an hour of Martian sunlight. Global warming is caused by retaining more of the Sun's heat, not with nuclear bombs.

A life supporting atmosphere needs to contain a "buffer gas", such as nitrogen. Mars is currently lacking in nitrogen, but nitrogen could be sourced from Venus, Saturn's moon Titan, or from comets. (Note that it is likely that Mars has nitrogen in its soil, see Atmospheric loss.)

Curiosity rover detected nitrates in the soil of Mars. If widespread, this is very good news for terraformers, as the nitrogen is biologically available and if moved into the atmosphere, would give Mars approximately 0.3 Bar of Nitrogen partial pressure. [1]

The first creatures to live on the natural Mars landscape would be bacteria. Cyanobacteria (aka blue-green algae), live in water and would produce oxygen. They can live under ice if the ice cover is not too thick.

Certain organisms, such as archaea, lichen, and tardigrades have been proven capable of surviving for some time in extreme environments, such as the vacuum of space. They could gain a foothold on the Martian surface after minimal terraforming. The byproducts of their metabolism would contribute to the terraforming efforts.

To increase Martian air pressure to 25 kPa, 2500 kg per m2 of atmosphere would be required. This is equivalent to a layer of about 1,5m of solid CO2. Ideally, the CO2 would be supplemented by an inert gas, such as nitrogen, that might be sourced from comets or from the outer solar system. To round out the use of existing CO2, About 2-3e17 kg of nitrogen would need to be imported. If the importation deltaV was 10 km/s, then the entire amount solar energy falling on Mars for about 20 years would be required to move the nitrogen to Mars.

The water available on Mars in frozen form is already sufficient for a significative ocean.

The ultimate results of terraforming are disputed. Terraforming may have only a temporary effect, even if the effect lasts for some hundred or thousand years. Eventually, the solar wind may carry away most of the new atmosphere due to the insufficient magnetic fields of Mars, though this would take millions of years. (See Atmospheric loss for more details.)

It has been suggested that the cost of terraforming a planet would be prohibitive. However, to a growing population on the surface of that planet it would most likely be considered a normal colonial function to ensure that daily colonial endeavors have a positive effect on the atmosphere.

Artificial magnetic fields might also be created around Mars to reduce atmospheric losses to space. And the solar system contains sufficient resources to replenish Martian atmosphere indefinitely, but at a significant energy cost. Building space habitats might be a more practical long term objective for human occupation of space.

To make it so a breathing mask is not required, the pressure needs to be at least 250 mbar (25% Earth's pressure). This might be composed of 118 mbar of nitrogen, 1 mbar of argon and neon, 1 mbar of water vapour and 130 mbar of oxygen (minimal requirement oxygen pressure). Note that the CO2 must be at trace levels for animals to breath. CO2 of 0.05% is the maximum we would want for a breathable atmosphere. (Argon and neon are not needed for life, but can act as a buffer gas.)

We would want to increase CO2 partial pressure to warm the planet, but would have to later draw down this CO2 level if we wish to make the plant habitable for animals.

"Terraforming: Engineering Planetary Environments", by Martin J. Fogg, ISBN: 1-56091-609-5, is a highly detailed textbook on the subject. It is very hard to find. Perhaps the Mars Society could update it and republish it.