Water will mostly be in a frozen state and will need to be heated to be melted. This required about 336 kJ per kg for the phase change from ice to water. Heating the water from Mars ambient temperature to the water treatment process temperature will also require about 4,18 kJ/kg x 70C = 292 kJ/kg for a total of 628 kJ/kg. At an energy cost of 230$/GJ, this corresponds to 0,14 $/kg. Unless waste heat is common & inexpensive, (say from a nuclear reactor), it is likely that ice will be placed in a greenhouse like environment where sunlight (perhaps concentrated sunlight with mirrors), warms the environment to above freezing. (Smart Windows would be of help here.)

Water at freezing temperature has a hardness of about 1.5 Mohs[1]. This puts it between talc and gypsum, so relatively soft. However, ice gets harder as it gets colder. At -70C its hardness on the Mohs is about 6[2], or just below the hardness of quartz. So drilling through cold Martian ice might be very close to drilling through granite, that has a hardness of 6 to 7. However, it seems ice has significantly less shear strength than rock[3] so drilling might not be too much work, even if the ice is still cold.

Transportation of water on Mars will probably mostly be done using heavy trucks. These use about 2,4 kJ/kg/km on Earth.[6]. For a water source 15 km away, the energy to move the ice will be similar to the energy to extract the ice, but still less than 5% of the energy required to melt the ice. Rail might reduce the energy significantly, and the lower Martian gravity might help as well.

Recycled water will incur none of the above costs. So water treatment is interesting as an energy efficiency measure at the settlement, depending of the cost of the recycling equipment, which may be quite high if it comes from Earth. 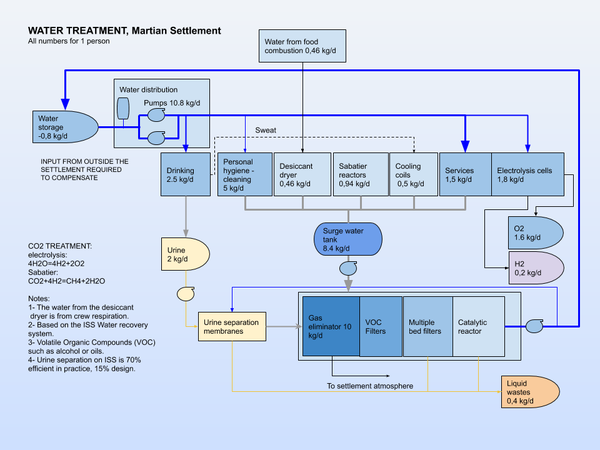 Used water goes to the waste water treatment plant. It is purified using different treatments and the minerals and contaminants removed are recycled. The water is stored, or mixed with water from the settlement systems and returned to water treatment plant for reuse. However, depending on the cost of water treatment, it may be more cost effective to return more heavily contaminated water to the Martian environment, possible recuperating the contaminations as resources as the water evaporates in the low pressure Martian atmosphere.