This quadrangle was named after Elysium, a place of reward (Heaven), according to Homer in the Odyssey.[1]

The InSight lander touched down in the southern part of this quadrangle in 2018 and is now gathering data especially on Marsquakes. InSight made a soft landing as planned on November 26, 2018 at 4.502 °N, 135.623 °E. InSight landed in a crater that is 25 meters in diameter called Homestead Hollow. [3] 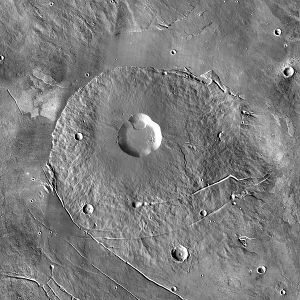 Albor Tholus as seen by THEMIS

The area near the volcanoes of Elysium is covered with lava flows. On close examination, some flows can even be seen to approach and then stop when reaching higher ground. (See pictures below for examples) The top of a lava flow often cools quickly, forming a hard crust, but lava still moves under the crust. Such movement breaks up the top layer making it very rough.[4] Such rough flow is called aa lava. The lava flows here are of the aa variety.

Some places in the Elysium quadrangle are young geological. Some researchers call them Platy-Ridged-Polygonized terrain. The surface of this terrain has been suggested to be pack ice, basalt lava, or muddy flows. HiRISE images show the heights of the surface ridges to be usually less than 2 meters--far less than what is expected from lava flows. In addition, the high resolution photos of HiRISE indicates that the surface appears to flow. This would not occur with pack ice. So, the researchers concluded that muddy flows cover the surface.[5] For a while, many believed the surface was made of ice flows, which it sort of resembles.

"Rootless cones" are caused by explosions of lava with ground ice.[6] [7] [8] The ice melts and turns into a vapor and creates a cone or ring. These cones are found in Iceland, in places where lava covers water-saturated ground.[9] [10] [11] 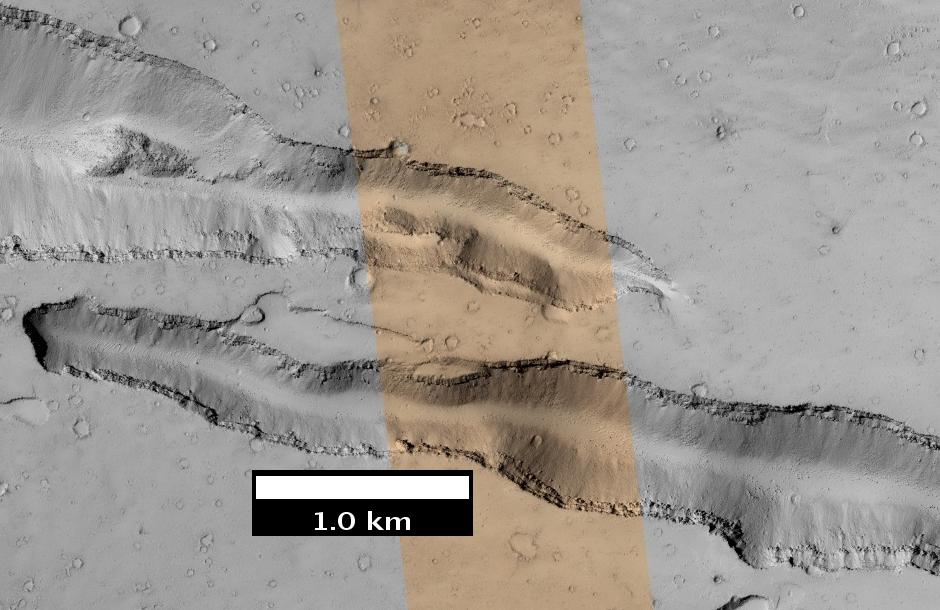 Troughs to the east of Albor Tholus HiRISE images only have a color strip in the center. Marquakes detected by InSight are originating in places like this.

Long, narrow depressions are common on Mars. They are called troughs or fossae in the geographical language used for Mars. Troughs may be made when the crust is stretched until it breaks. The mass of the huge volcanoes can cause this stretching. Fossae and common in the Elysium quadrangle as are volcanoes. A trough often possesses two breaks or faults with a middle section lower. This leaves steep cliffs along the sides and is called a graben.[12] Lake George, in northern New York State, is a lake inside a graben. Pits are often associated with troughs. Troughs often appear to begin as a line of pits. Pits result when material collapses into a void. Pits do not have rims or ejecta around them, like impact craters do.[13] Another explanation for the formation of fossae and pits or pit craters as they are called, is that they may be from dikes of magma. Dikes form when magma moving underground travels upward along a fault or break in the rock. Magma might move along, under the surface, breaking the rock, and more importantly melting ice. The resulting action would cause a crack to form at the surface. The images below of the Cerberus Fossae, the Elysium Fossae and other troughs, as seen by HiRISE are examples of fossae.

Researchers have discovered that there is a large plume under Cerberus Fossae. It is almost the area of the continental United States. The plume is warmer than its surroundings by 95 to 285 degrees Celsius (171 to 513 degrees Fahrenheit). The uplift caused by this plume stretched the crust, cracking it to form Cerberus Fossae. Plumes like this are like the plume under Hawaii.

Evidence for the plume are (1) origin of nearly all Marsquakes, (2) a rise of a mile above the surroundings, (3) crater floors tilted away from the rise, and (4) slight variations in the gravity field showing that the uplift is supported from deep within the planet. Cerberus Fossae is in Elysium Planitia, a site of the youngest known volcanic eruption on Mars. That eruption produced a small explosion of volcanic ash around 53,000 years ago--a short time in geology.

The discovery of a plume increases the chance of life. Heat from the plume could melt ground ice; consequently, allowing chemical reactions that could sustain life.[14] [15] [16]

Knowledge of the locations and formation mechanisms of pit craters and fossae is important for the future colonization of Mars because they may be hold water.[17]

Like nearly all of Mars, the surface of Elysium quadrangle contains numerous impact craters. The large numbers of craters are a consequence of the extreme age of most of the Martian surface. Older surfaces display more craters. Impact craters generally have a rim with ejecta around them; volcanic craters do not have a rim or ejecta deposits. As craters get larger (greater than 10 km in diameter) they usually possess a central peak.[19] The peak is caused by a rebound of the crater floor following the impact.[20] Sometimes craters will display layers. The collision that produces a crater brings rocks from deep underground. Hence, craters can show us what lies deep under the surface. Some craters are called "ring-mold" craters. They resemble ring molds used to make cakes. Some researches think they are caused by rebound from an ice layer. If this is true, they may be sources of pure ice for future colonists of Mars.

Streamlined shapes, as seen by HiRISE under HiWish program These were probably shaped by running water.

Some landscapes in the Elysium quadrangle show strong evidence for flowing water. Channels that look like old river valleys are called Vallis in the language used for Mars.

Some valleys appear to start from grabens. Granicus Vallis and Tinjar Vallis begin at grabens that lies just to the west of Elysium Mons. The grabens may have formed because of volcanic dikes. Heat from the dikes would have melted a great deal of ice. Remember dikes are walls of rock that were once hot, liquid magma that followed cracks or faults in the rock.[21]

The Athabasca Valles are perhaps the youngest outflow channel system on Mars. They lie 620 miles southeast of the large volcano Elysium Mons. Athabasca was created when water burst out of the Cerberus Fossae, a set of cracks or fissures in the ground.[22] [23] The Cerberus Fossae most likely were formed from the stress on the crust caused by the weight of both Elysium Mons and the Tharsis volcanoes. Current evidence suggests that Cerberus floods probably erupted in several stages.[24] Near the start of these channels (at one of the Cerberus Fossae), the system is called the Athabasca Valles; to the south and east it is called Marte Vallis. Water really gushed out of the ground. Flow rates in Marte Vallis have been estimated at around 100 times that of the Mississippi River. Eventually, the system just seems to fade out in the plains of Amazonis Planitia.[25] Streamlined shapes here demonstrate that much water once moved though this area.

Some places on Mars break up with large fractures that create a terrain with mesas and valleys. They may have started with cracks that became larger and larger as ice in the ground disappeared by the process of sublimation. In the thin atmosphere of Mars, ice will turn directly into a vapor. Since the ground contains so much ice when the ice leaves, large canyons are formed. Some of these can be quite beautiful.

Mesas have a flat top and steep sides. The top layer of a mesa is often called a cap rock because it protects the underlying layers from erosion. Mesas often form from the erosion of a plateau. Mesas represent the remnants of a plateau, so they can show us what types of rocks covered a wide region. [26] 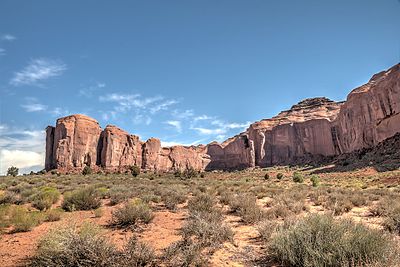 Spearhead Mesa in Monument Valley Note the flat top and steep walls that are characteristic of mesas.

Mesas, as seen by HiRISE under HiWish program These are like the ones in Monument Valley