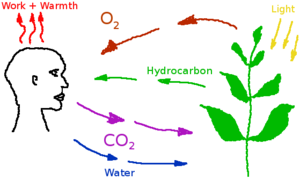 Plants are multicellular organisms that gain energy through photosynthesis, though some species are parasitic or carnivorous. Unlike animals, fungi and other microbes, plants have cell walls made from cellulose.

Plants on Mars will be produced in greenhouses or grow rooms. In the longer term, plants might be adapted to the Martian environment as part of a terraforming program.

Plants are a vital source of food, carbohydrates and proteins, chemicals, and construction materials such as wood, straw and bamboo. Also, a well balanced carbon cycle delivers oxygen for breathing. Note that during exploratory missions oxygen will be brought along. In early habitats, oxygen will be made industrially, so plants will not be mission critical for life support. Only when the population gets large, will we try to make a biosphere. See biosphere 2 for more info.

Greenhouse space and resources in a settlement are limited, and must be used carefully. Plants need to be selected carefully in order to provide the highest return on the resource investment.

Selected plants must be easy to propagate through seeds, roots, or cuttings.

Hybrid plants, while common in terrestrial agriculture, are less desirable than pure strains. Hybrids are often sterile, and those that do reproduce sexually yield offspring that resemble the original strains more than the hybrid. Any hybrids grown in settlements will likely be propagated asexually through cuttings.

Plants that reproduce sexually need enough genetically distinct individuals to prevent harmful inbreeding. Though disease and parasites will likely be left behind, there is always a risk of accidental exposure, or even the emergence of new diseases. A genetically diverse population has historically fared better than one with low diversity.

Greenhouses provide residents a great deal of control over the growing environment. Even so, certain plants must be excluded due to the difficulties involved in their growth. Many trees, for instance, grow too tall, and require extensive root systems that are impractical for small greenhouses.

Plants should be selected based on the value they provide to the settlement. This could be in the form of food, natural fiber, chemicals, or even just raw biomass. Some plants, such as flax, provide multiple benefits.

Plants require light for growth and Mars gets about 1/2 the sunlight as Earth. Thus shadow tolerant plants may be selected. Various plants have different requirements, depending on their original environment on Earth.

(Note, I'm no expert on plants, feel free to revise this list if something seems off to you, or if you know of an ideal plant for Mars.)