From Marspedia
(Redirected from Autonomous colony)
Jump to: navigation, search 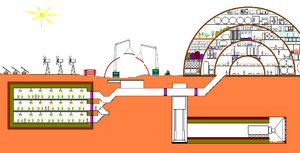 The available solar energy on Mars is slightly less than have the one available on Earth for the same area. An analysis of the embodied energy in solar panels fabricated on Mars would need to be done to prove that the panels can generate more energy than they use for their construction and operation. The embodied energy of polycristalline solar panels, including the support structure, is about 4000 MJ/km2[2]. A solar panel on Mars should produce about 3,6 MJ/day. So the cell would produce the energy for it's own fabrication in about 1100 days, or about 3 years. So the rest of the energy produced during the cells lifetime can go to other uses, and it should be possible to create a self sufficient settlement. Periodic storms might reduce the production, but this does not change the conclusions.