From Marspedia
(Redirected from Colony)
Jump to: navigation, search 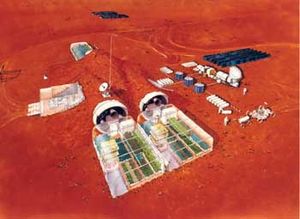 Artist's concept of a settlement on Mars

Settlements on Mars are planned to be a permanent habitat for human beings. The Mars Foundation™ is developing detailed plans for a Hillside settlement and a Plains settlement.

The use of the word "Settlement" is proposed over the use of "Colony" as colony usually implies there is a formal link between the establishment and an original state. In particular, if one of the goals of the habitat is complete autonomy, settlement is more appropriate description.

Why settlements on Mars?

Compared with other celestial bodies, for instance Earth's Moon, the planet Mars provides a number of advantages. The Martian surface and atmosphere consists of all necessary substances that are needed to build and maintain a human settlement, including water, carbon and minerals. The environmental conditions are quite cold, but not too cold. The distance from the sun allows solar panels to operate, which is essential for energy production. (Note: there may be geothermal power on Mars, and nuclear power can work anywhere.) The sunlight is also sufficient for plants to grow. (This is not possible beyond the asteroid belt.)

Particularly convenient is the existence of a visible sky, which can make people feel at home, and the day-night rhythm is nearly earth like. Though the gravity is lower than on Earth, it still allows people easily to walk and do exercise. The spacial orientation is supported. The comfort of sinking into a pillow for sleeping might be appreciated. And yet, there are several things, settlers would miss.

Mars' distance from the Earth is a significant drawback, as it requires much more time (sixty times more and over) to be reached. 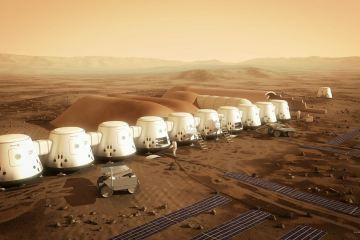 Mars One - Artist's concept of a settlement on Mars

Large rotating space settlements, such as those proposed by Gerald O'Neil, have a number of advantageous characteristics that put them in competition with Mars settlements.