Surface habitats used to create a settlement could be inflatable like NASA's transhab project. The modules would be unfolded, inflated, connected together and covered with regolith. The insides of the habitats would then be outfitted.

Inflatable habitats offer the most benefit to initial settlements and outposts which require buildings shipped from Earth. They offer greater space than rigid habitats of the same initial volume.

An Earth atmosphere pressurized inflatable habitat has an internal pressure of 5 to 10 tonnes per m2 (50 to 100 kPa). Density of regolith is about 1500 kg/m3, this corresponds to 525 kg of soil pressure per m2 at Mars gravity. So the habitat can support up to 19m of regolith. Studies have shown than a single meter of regolith may be sufficient for radiation protection for both solar storms and GCRs.[1]. So an inflatable habitat may well be buried for radiation protection.

A simple inflatable habitat for a Martian settlement. The structure is extended then the volume is inflated. Once the module is stable, it can be buried under regolith for radiation protection. There are two floors for a total volume of xxm3 and a typical floor space of xx m2. This design could house xx occupants. 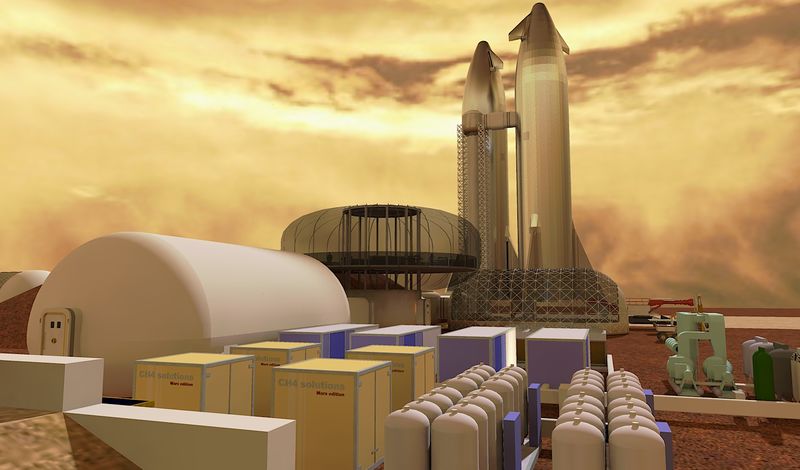 An early Settlement made from inflatable modules and landed SpaceX Starships. Propellant production equipment is in the foreground.