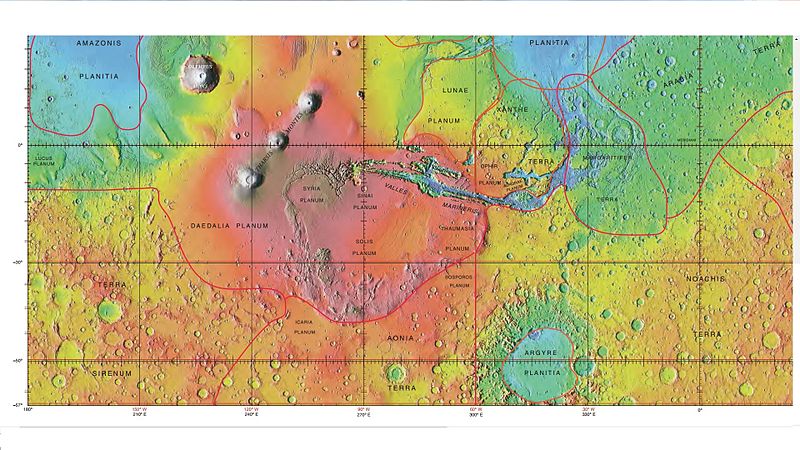 The quadrangle covers the area from 45° to 90° west longitude (315 E-270 E) and 0° to 30° north latitude. The Viking I Lander set down in the quadrangle on July 20, 1976, at 22.4 N and 47.5 W (312.5 E). It was the first robot spacecraft to successfully land on the Red Planet.[2] In this article, some of the best pictures from a number of spacecraft will show what the landscape looks like in this region. The origins and significance of all features will be explained as they are currently understood.

Viking 1 found the Martian sky a light pink and many rocks. It found the wind speed to be the wind usually 7 meters per second (16 miles per hour). Some boulders displayed erosion by the wind.[3] Many small sand dunes were observed to be still active. Viking found a hard crust on the top of the soil that was comparable to a deposit, called caliche which is common in the U.S. Southwest.[4] [5] These crusts are formed by solutions of minerals moving up through soil and evaporating at the surface.[6] 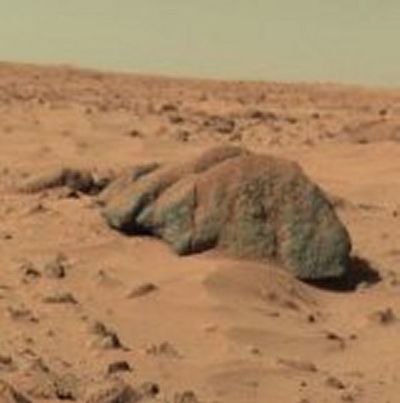 The soil resembled those produced from the weathering of basaltic lavas. At this location the soil contained abundant silicon and iron, together with significant amounts of magnesium, aluminum, sulfur, calcium, and titanium. Trace elements, strontium and yttrium, were identified. Potassium levels were five times lower than the average for the Earth's crust. Some chemicals in the soil contained sulfur and chlorine that were like those remaining after the evaporation of sea water. Sulfur was more concentrated in the crust on top of the soil than in the bulk soil beneath. Scientists reasoned that the sulfur may be present as sulfates of sodium, magnesium, calcium, or iron; however, a sulfide of iron is also possible.[7] This finding was consistent with measurements from both the Spirit Rover and the Opportunity Rover ; hence, sulfates may be common on the Martian surface.[8] Using results from the chemical measurements, mineral models suggest that the soil could be a mixture of about 80% iron-rich clay, about 10% magnesium sulfate (kieserite?), about 5% carbonate (calcite), and about 5% iron oxides (hematite, magnetite, goethite?). These minerals are typical weathering products of mafic igneous rocks, such as basalt.[9] Studies with magnets aboard the landers showed that the soil is between 3 and 7 percent magnetic materials by weight. The magnetic chemicals could be magnetite and maghemite. These could come from the weathering of basalt rock.[10][11] Experiments carried out by the Mars Spirit rover (landed in 2004) indicated that magnetite could explain the magnetic nature of the dust and soil on Mars. Magnetite was found in the soil and that the most magnetic part of the soil was dark. Magnetite is very dark.[12] Viking did three experiments looking for life. The results were surprising and interesting. Most scientists now believe that the data were due to inorganic chemical reactions of the soil. But a few still believe the results were due to living reactions. No organic chemicals were found in the soil; hence nearly all the scientific community thought that no life was found because no organic chemicals were detected. Not finding any organics was unusual since meteorites raining on Mars for 5 billion years or so would surely bring some organics. Nevertheless, one must keep in mind that dry areas of Antarctica do not have detectable organic compounds either, but they have organisms living in the rocks.[13] Mars has almost no ozone layer, unlike the Earth, so UV light sterilizes the surface and produces highly reactive chemicals such as peroxides that would oxidize any organic chemicals.[14] Perchlorate may be the oxidizing chemical. The Phoenix Lander discovered the chemical perchlorate in the Martian Soil. Perchlorate is a strong oxidant so it may have destroyed any organic matter on the surface.[15] If it is widespread on Mars, carbon-based life would be difficult at the soil surface. The question of life on Mars received a new, important twist when research, published in the Journal of Geophysical Research in September 2010, proposed that organic compounds were actually present in the soil analyzed by both Viking 1 and 2. The study's authors found that perchlorate will destroy organics when heated and will produce chloromethane and dichloromethane-- the identical chlorine compounds discovered by both Viking landers when they performed the same tests on Mars. So, organic chemicals (maybe from organisms) may have initially been present in the soil but were broken down by perchlorate. [16]

"Vallis" (plural "valles") is the Latin word for valley. It is used for the naming of landform features on other planets. "Vallis" was used for old river valleys that were discovered on Mars, when we probes were first sent to Mars. The Viking Orbiters caused a revolution in our ideas about water on Mars; huge river valleys were found in many areas. [17] [18] [19] 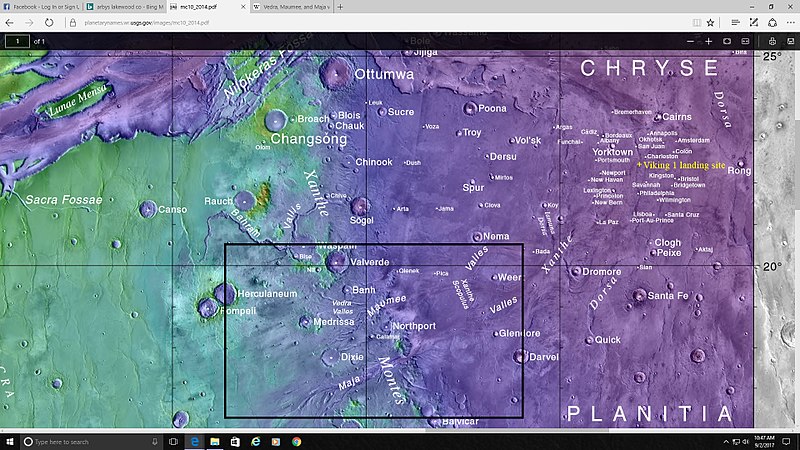 The Viking Orbiters caused a revolution in our ideas about water on Mars. Huge river valleys were found in many areas. They showed that floods of water broke through dams, carved deep valleys, eroded grooves into bedrock, and traveled thousands of kilometers.[20] [21] [22] 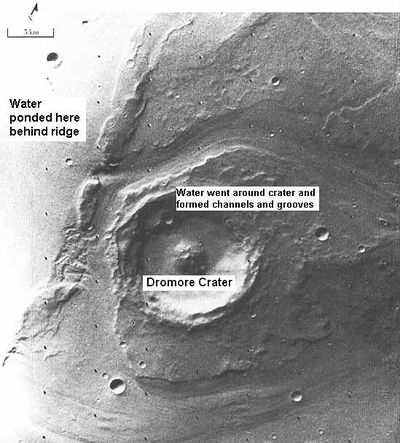 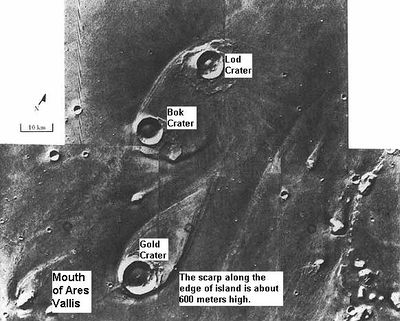 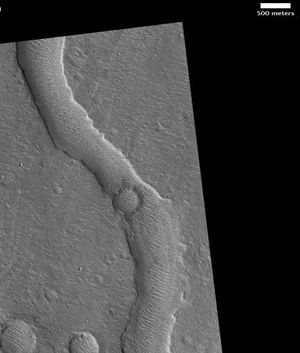 Hypanis Vallis is one of the sites proposed as a landing site for the Mars Science Laboratory Scale bar is 500 meters long.

One of the most significant features of the Lunae Palus region, Kasei Valles, is one of the largest outflow channels on Mars. Like other outflow channels, it was carved by liquid water, probably during gigantic floods. Kasei is about 2,400 km (1500 miles) long. Some sections of Kasei Valles are 300 km (190 miles) wide. It begins in Echus Chasma, near Valles Marineris, and empties into Chryse Planitia, not far from where Viking 1 landed. Sacra Mensa, a large tableland, divides Kasei into northern and southern channels. Kasei Valles is one of the longest continuous outflow channels on Mars. At around 20° north latitude Kasei Valles splits into two channels, called Kasei Vallis Canyon and North Kasei Channel. These branches recombine at around 63° west longitude. Some parts of Kasei Valles are 2–3 km deep.[24] Scientists suggest it was formed several episodes of flooding and maybe by some glacial activity.[25] 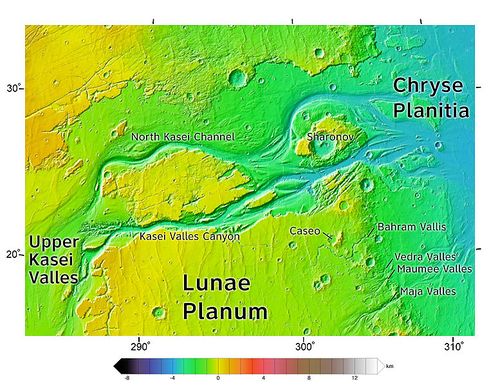 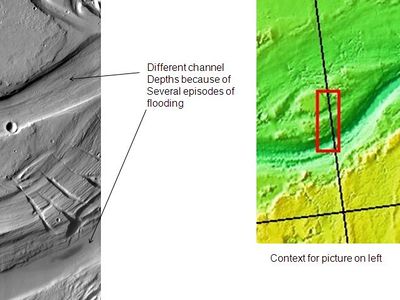 Kasei Valles, as seen by THEMIS

Close view of layers along wall of Kasei Valles, as seen by HiRISE under HiWish program

Researchers have found a number of examples of deltas that formed in Martian lakes. Finding deltas is a major sign that Mars once had a lot of water. Deltas often require deep water over a long period of time to form. Also, the water level needs to be stable to keep sediment from washing away. Deltas have been found over a wide geographical range.[26] 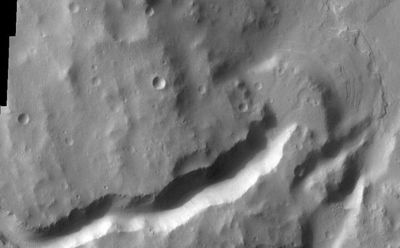 Delta in Lunae Palus quadrangle, as seen by THEMIS. 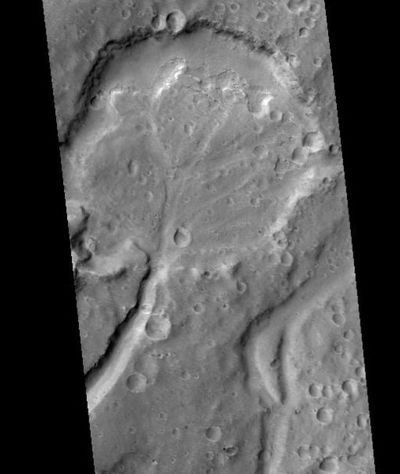 Delta that fills a crater, as seen by HiRISE.

Crater showing layers, as seen by HiRISE under HiWish program

Impact craters generally have a rim with ejecta around them, in contrast volcanic craters usually do not have a rim or ejecta deposits. As craters get larger (greater than 10 km in diameter) they usually have a central peak.[27] The peak is caused by a rebound of the crater floor following the impact.[28] Sometimes craters will display layers. Craters can show us what lies deep under the surface. 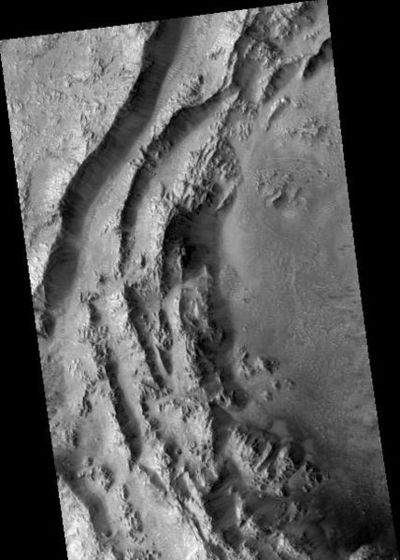 West side of Santa Fe Crater

Montevallo Crater, as seen by THEMIS. Image shows a landslide on the north rim.

Labeatis Fossae, as seen by THEMIS one of many troughs (long narrow depressions called fossae {Latin}) Fossae form from the crustal stretching by weight of volcanoes.[29] [30] 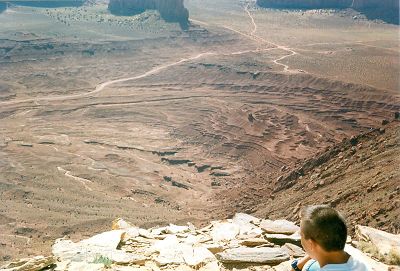 Layers in Monument Valley. These are accepted as being formed, at least in part by deposition in a large body of water. Since Mars contains similar layers, water remains as a major cause of layering on Mars.

Close view of layers, as seen by HiRISE under HiWish program 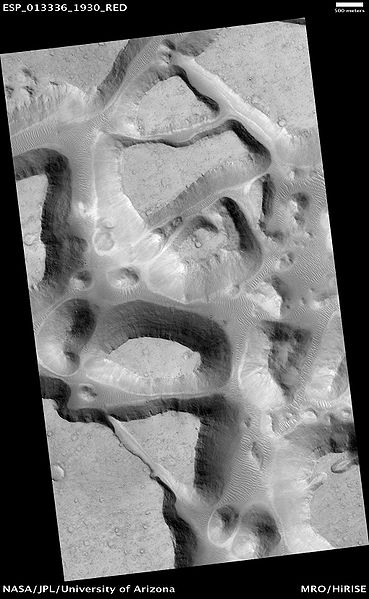 Dark slope streaks, as seen by HiRISE under HiWish program Shapes of streaks have been affected by boulders.