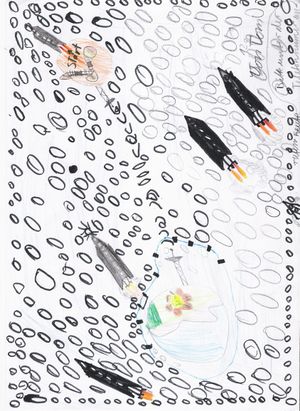 Space access is the ability for persons to leave a planet's surface. This page is an introduction on basic principles and technology of getting from the Martian surface to an orbit or into free space.

A human colony on Mars can be established with or without space access. The fight against the gravitational pull requires large amounts of energy. Since the gravity of Mars is smaller than Earth' and the atmosphere is thinner, space access is easier. However, the energy resources of such a colony are limited. Using parts of the available energy for space access could be thought to reduce other project's progress.

However, space access for a martian settlements also means that there is a way to return the transportation vehicle back to Earth and re-use it. This will greatly reduce the cost of transportation from Earth to Mars. This is the In-situ ressources paradigm.

Beyond returning the transportation vehicles back to Earth for re-use, Assuming the colonists went to Mars to stay there and build their own civilization, there still might be some additional tasks to do: 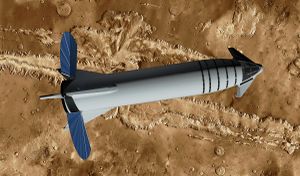 A SSTO on Mars, the SpaceX Starship is a TSTO on Earth.

The craft should be:

It has proved very difficult to build an SSTO launcher on Earth, but the lower Martian gravity would be of assistance to any launching spacecraft. If the craft uses multiple stages, these will all have to be recovered separately, which complicates the process of reuse. SpaceX has proposed a combination vehicle that is SSTO on Mars, but TSTO on Earth. The combination of Starship and Falcon super heavy, or Booster.

Hydrogen, methane and oxygen propellants can be obtained from martian ice. The attitude control thrusters could use gaseous oxygen and methane, kept under pressure.

Early landers will probably be non-reusable or only partially reusable. The descent stages of these landers could be dismantled and reused.

The guidance systems on the lander need not be hi-tech. The Apollo spacecraft flew to the Moon using less computing power then a pocket calculator. A simple computer, or a pneumatic system could be used. Although there are advantages with hi-tech systems, lo-tech systems could be included as a backup.

However, precise landing to a dedicated landing pad would require advanced adaptive control techniques, as otherwise the probable landing area is often measured in tens of km2.