Unmanned setup of a whole settlement 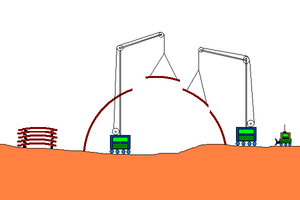 The unmanned setup of a whole settlement is a safe and economical way to colonize the planet Mars. There are many uncertainties with the alien environment. The equipment is tested on Earth thoroughly, but still the influence of the Martian environment might not be understood completely. The safest way is an unmanned setup by automated and remote controlled machinery.

Transport of the equipment to Mars

After evaluation of all known data the location for the initial settlement is determined. The equipment is brought to the Martian surface. This may take several space flights. The equipment for the construction of buildings is brought first.

Cargo landings on Mars with larger versions of the aeroshells and parachutes used to land robotic probes might be impractical.[1] Since the Martian atmosphere is thin, wings might not be an option. The feasibility of a space elevator for landing large amounts of cargo should be analyzed with respect to the costs, as well as options mentioned in Landing on Mars.

Houses, energy-generating appliances and greenhouses are setup and brought into function, all remote controlled from Earth. This habitat must be large enough to provide working space and food production space for an initial population. This could be done with the following concepts:

The remote control from Earth of industrial activity including the construction of buildings on Mars presents some special problems. The artificial intelligence acting on instructions with up to 44 minutes round trip communications delay would need to know what to do with concrete that it mixes so that it never lets concrete set in the mixer while waiting for instructions to deal with an unexpected circumstance. Various industrial operations cannot be stalled without harm, so the operations will need to be tested on Earth to see that they run smoothly. The AI will need to have fail-safe options to deal with failures to follow the plan.

From the experiences of Biosphere 2 we can not assume a fully passive stability of the ecosystem. The material of the walls might react with the artificial atmosphere and the substances of the soil, causing a shift in concentration. Also, the hermetic sealing is not perfect. Conclusion: Machinery for automatic control of water, air and soil chemistry as well as pressure control is a must.

First the greenhouse is prepared. The bottom is covered with powdered regolith, enriched with fertilizer and moistened with water. An appropriate air pressure is created. A small amount of terrestrial soil implants microbes. Seeds of pioneer plants are brought in to transform regolith into rank soil, which takes several years. If applicable the greenhouse is artificially lit and heated.

When the greenhouses are fully functioning the first plants are brought to Mars. The trial should prove the stability of the biosphere with the metabolism of living plants, decomposition of foliage and reproduction.

Some small animals, such as chickens and rabbits are brought to Mars. They are released in the full-grown forests of the greenhouses and serve both as a test inhabitant and as a first food source for the settlers.

An alternative type of agriculture would be hydroponic

An advantage of hydroponics in a greenhouse on Mars is that the soil does not take years to produce. There is increased complexity in troughs for holding the soil and pumps for distributing water and nutrients on a regular schedule, but the soil itself only needs to provide mechanical support for the plant roots, adequate drainage properties and a lack of chemically toxic substances.

This would be a large task both in technical complexity and in size of the initial capital investment.

Arrival of the settlers

The human settlers are shipped to Mars after completion of all construction and evaluation of the tests. After arrival they kill most of the animals and freeze them. From now on the settlers are part of the biosphere. They can rely on a mature and stable habitat.