The Amenthes quadrangle contains features with names like Isidis, Amenthes Fossae, Libya Montes, and Escalente Crater. Nearly all the names of Martian locations are from old writings like the Bible and Homer. Early astronomers gave names to things they saw on Mars. Things were given names and then other names, over and over. Finally the astronomer Giovanni Schiaparelli, after making drawings when Mars was exceptionally close in 1887, assigned the names still in use today, over a hundred years later.[1] [2] Giovanni Schiaparelli is called the Father of Mars—at one point he knew more about Mars than any other living person. The name Amenthes is the Egyptian word for the place where the souls of the dead go.[3]

The Amenthes quadrangle contains several features commonplace on Mars. It has dark slope streaks, troughs (fossae), and river valleys (Vallis {word used in planetary geology}) in this quadrangle. This quadrangle contains the Isidis basin, a location where magnesium carbonate was found by Mars Reconnaissance Orbiter. This mineral indicates that water was present and that it was not acidic. This fact increases the chances of life here in the past. Although some organisms can live in an acid environment, most living things do not thrive in an acid environment. The Beagle 2 lander was about to land in the quadrangle, particularly in the eastern part of Isidis Planitia, in December 2003, when contact with the craft was lost. In January 2015, NASA reported the Beagle 2 had been found on the surface in Isidis Planitia (location is about 11.5265 N and 90.4295 E.[5] [6] High-resolution images captured by the Mars Reconnaissance Orbiter identified the lost probe, which appears to be intact.[7] [8] [9]

Crater and ejecta, as seen by HiRISE under HiWish program 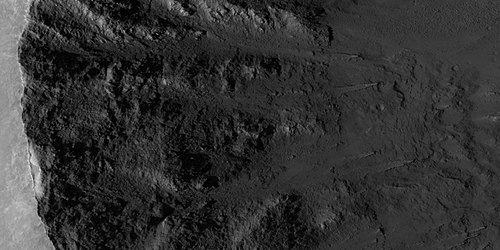 Some craters in the Amenthes region (as well as other parts of Mars) show ejecta around them that have lobes. It is believed that the lobed shape is caused by an impact into water or ice logged ground. Calculations suggest that ice is stable beneath the Martian surface; hence, it is reasonable to think that some asteroids slammed into ice-rich ground.

At the equator a stable layer of ice might lie under as much as 1 kilometer of material, but at higher latitudes the ice may be just a few centimeters below the surface. This was proven when the landing rockets on the Phoenix lander blew away surface dust to reveal an ice surface.[10] [11] The larger an impact crater, the deeper its penetration, a large crater is more likely to have a lobate ejecta since it went down to the ice layer. When even small craters have lobes, the ice level is close to the surface.[12] This idea would be very important for future colonists on Mars who would like to live near a source of water.

Impact craters generally have a rim with ejecta around them, in contrast volcanic craters usually do not have a rim or ejecta deposits.[13] Sometimes craters will display layers. Since the collision that produces a crater is like a powerful explosion, rocks from deep underground are tossed unto the surface. Hence, craters can show us what lies deep under the surface. One crater in the Amenthes quadrangle is believed to be a source of nakhlite meteorites. A team of researchers found that these particular meteorites came from four different eruptions of lava because they showed different ages. The ages were measured by comparing isotopes of the element Argon. Since the ages vary from 93 to 1322 million years, the authors concluded that volcanoes grow much more slowly on Mars than the Earth. The wide range of ages mean that Martian volcanoes erupt off and on for a long, long time. Many of the volcanoes on the Earth grow much quicker, as they form at plate boundaries. In contrast, Martian volcanoes probably form from plumes.[14]

Hebrus Vales has tributaries, terraces, and teardrop shaped islands. The teardrop shape of the islands tells us what direction the water used to flow. The terraces may be caused by different layers of rocks or from the water being at different levels in the past. Often, the water level in places changes. For example, if the water flows at a high level for a time, it will create a terrace or beach at that level. And then later, if the level drops, a new terrace will be made.[15] These features are common for the rivers of the Earth.

Wide view of streamlined shapes, as seen by HiRISE under HiWish program

Streamlined shapes are formed from erosion by flowing water. Hence, when we see such shapes we know running water was involved. Mars shows many signs all over its surface that it once had much water. Based on the evidence of all these signs of past water, scientists believe that there is a good chance that life arose and thrived early in its history. Interestingly to consider is the possibility that life first began on Mars and then was later transported to the Earth by low angle impacts of asteroids. Many, many meteoites have been found that have been proven to have originated on Mars. Experiments have shown that organisms could survive the journey. So, many of our genes (DNA) may be of Martian origin. If we find chemical evidence of life on Mars, maybe after just a few months of study we will know whether we our decedents of Martian organisms.

Close view of streamlined shapes Arrow indicates the direction of past flowing water.

Another location with streamlined shapes formed by flowing water

Cones indicated with arrows, as seen by HiRISE under HiWish program

Cones can have their origin from volcanic methods or from the movement of mud. When a layer of mud is covered over, it may become pressurized and move up, erupting into what we call “mud volcanoes.” They are common in some areas of Mars. Cones seen in the Amenthes quadrangle are probably mud volcanoes. The pictures in this section show some of the cones found in Amenthes.

Another scene with cones

Wide view of cones and trough 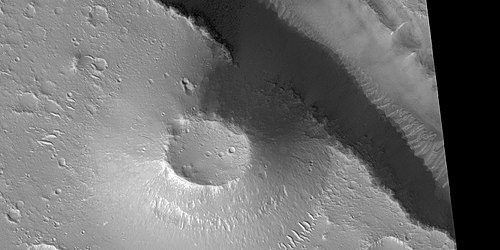 Cone next to a trough

Mesas form when erosion has removed much of the surrounding ground. They are the remains of material that once covered a wide area.

The Amenthes quadrangle is also home to troughs (long narrow depressions) called fossae in the geographical language used for Mars. These troughs form when the crust is stretched until it breaks. The stretching can be due to the large weight of a nearby volcano of which Mars has plenty.

Scamander Vallis. Dark slope streaks may be seen in the image.