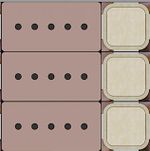 The Lower gravity of Mars is an environmental factor that may or may not be important in the long run. If the lower gravity significantly affects the viability of a Mars settlement, it might be possible to build part of the habitat on a centrifuge. However, this may affect the economical viability of a surface settlement versus a rotating space habitat. 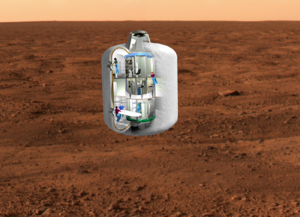 SpaceX proposes using the transportation vehicle as a habitat until surface installations are built.

These might be fabricated on Earth and installed on site, or fabricated using in-situ materials. See also Settlements on Mars.

A fourth stage habitat necessarily comes after some terraforming effort, and therefore after the passage of up to a century of time after the initial settlement. Note that a terraforming Mars to a fully breathable atmosphere is very hard, and make take millennia. But increasing Mars' atmospheric pressure to the point that breather masks can be used rather than pressure suits, would take much less time. Creating habitats that can hold air, but don't have to deal with a near vacuum on the outside would be far easier to construct.